On National Nurses Day, celebrated today at the start of National Nurses Week, I want to recognize the work that all nurses do, and to celebrate especially the pro-life nurses who refuse to participate in the murder of the unborn. 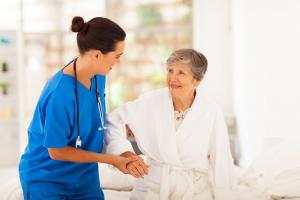 Nurses who take a stand for life have faced pushback over the years from professional associations and hospital administrators who have tried '" and sometimes succeeded '" in forcing nurses to take part in abortions.

I will never forget the story of a nurse in New York City who contacted Priests for Life several years ago.

She was forced to scrub in for a dismemberment abortion for a mother who was more than eight months pregnant.

She described the doctor as he braced his foot against the examination table and pulled with all his might to remove that precious child '" well past viability '" from his mother's womb.

The image of the child's intact rib cage would never leave her, she said. I still see it, too, as if I had been there.

Another RN, Cathy DeCarlo was forced to take part in the abortion of a 22-week baby while she was working at New York's prestigious Mount Sinai Hospital. Refusing to take part would have meant the end of her nursing career. Speaking at a press conference in 2017, Ms. DeCarlo recalled the abortion:

"I'll never forget that day as I watched in horror as the doctor dismembered and removed the baby's bloody limbs and I had to account for all the pieces. I still have nightmares about that day."

Last week, when the Trump administration issued a final rule to protect conscience rights of nurses and other healthcare workers '" and even insurance plans - it was another pro-life promise kept by President Trump.

The fact that both the Constitution and existing federal law protect the conscience rights of healthcare workers who do not want to participate in killing babies by abortion, and that nevertheless so many have been pressured and forced to do so is the function of two things.

First, the desperation of an abortion industry in a state of collapse leads those who like to present themselves as champions of freedom and choice to attack precisely those things as they advance their abortion agenda.

Secondly, it reflects the extremism of the Democrat party, which offers America just more and more baby killing with the wounds that result not only to moms, dads, grandparents, siblings, families, and our entire society but also to the practitioners who carry out these deadly procedures.

As the movie "Unplanned" shows, and as my work with former abortionists through the Society of Centurions has shown over the years, even doing a single abortion deeply harms a healthcare practitioner for life.

We need to protect babies from abortion and likewise protect those whose skills to save life are being hijacked to take life. President Trump's rule does just that.

Nurses who refuse to take part in abortion because of their religious beliefs are protected by the First Amendment freedom of religion. Last year, the president signed an executive order that makes it easier for Americans to exercise their freedom of religion.

Now this new rule gives them a second layer of protection based on their conscience rights.

Pro-life nurses and other healthcare workers are the last line of defense for the unborn. On this day and week set aside to honor the challenging and difficult work nurses do every day of every year, let's recognize those who go the extra mile by protecting the most vulnerable patients, the unborn.