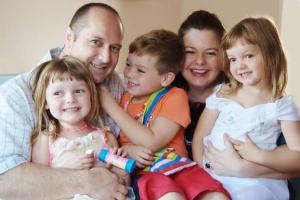 Washington D.C., (CNA) - The American Family Act is a broad expansion of the currently existing Child Tax Credit (CTC) - so broad, in fact, that researcher Lyman Stone said it could almost be considered something entirely different.

"...it's almost better to think of the plan, not as expanding the CTC, but rather as implementing a new child allowance. For example, the bill calls for the benefit ($3,600 per child) to be paid out in monthly checks, rather than as part of a tax refund," Stone, a research fellow with the Institute for Family Studies (IFS), wrote March 12.

The 2019 AFA is a Democrat-proposed and supported initiative, first introduced by Senators Michael Bennet (D-CO) and Sherrod Brown (D-OH) and backed by a majority of Democrats in both houses of Congress.

While the IFS typically leans right-of-center politically, Stone said most conservative arguments against the AFA fall flat, and that while the legislation is not without its flaws, a child allowance is something that should be supported across party lines.

"With a major child allowance now on the table, and with a real shot of being implemented in the next few years, it's time for conservatives to take stock of the evidence on the issue and decide if we are really willing to support families," Stone said.

The policy is similar to those that have been implemented in multiple countries in Europe, as well as Australia and Canada, and could potentially have similar benefits of strengthening families, boosting fertility rates and reducing childhood poverty, he added.

"Some of the most compelling evidence comes from Australia, where numerous studies of their 'baby bonus' program found both short- and long-term increases in births and birth intentions," Stone wrote. He estimated the cost of the Australia program to be about $100,000-$150,000 per child.

While population researchers have long sounded the alarm about overpopulation, the opposite now may be a bigger problem: in many countries throughout the world, fertility rates have dipped below replacement levels. In the United States, data from the National Center for Health Statistics suggests that the fertility rate is 16 percent below what it should be for replacement levels.

Australia saw a fertility increase of 1.73 to 1.96 kids per woman following their baby bonus, Stone noted, and the U.S. could see the number of births increase by tens or even hundreds of thousands if the AFA passes.

"Beyond these benefits, by reducing financial strain on families and creating an explicit benefit for childbearing, the AFA would support stronger families across a wide range of incomes. It's not unreasonable to suppose that it could reduce the prevalence of divorces motivated by financial strains, as well as yielding other positive family outcomes. Australia's baby bonus, for example, has been shown to improve child health and even eventual test scores," he said.

One major concern among conservatives about child allowance programs such as the AFA is the cost, Stone said, and the AFA is estimated to cost the U.S. about $90 billion.

Stone suggested that this money could come from a slight increase on taxes on excisable goods such as tobacco, alcohol, guns and gasoline.

"And while many conservatives may be upset about bullets costing 9 percent more than they currently do, that's a small price to pay for cutting child poverty in half, making Social Security more solvent, strengthening middle-class family life, and pushing the birth rate back towards something that can actually sustain a civilization without needing mass migration to prop it up," he wrote.

Even a family that spent a considerable amount on ammunition every year would only be spending potentially a couple hundred dollars more a year, compared with the potential of several thousand dollars per year earned through the child allowance, he said.

Overall though, Stone said he was not attempting to propose exactly how the child allowance could be funded but only "to note that while conservatives may balk at a $90 billion expense, it's easy to find ways to pay for it that conservatives can endorse. Charging urban progressives a few cents more for their $18 cocktails to pay for parents to buy diapers is worth it."

Another concern of conservatives over child allowances has been that it is just another government hand-out that would allow some people to quit their jobs and live off of government benefits, Stone noted.

"Is it really conservative to say that both parents should always have to work? Since when were conservatives opposed to stay-at-home parents? Are we suddenly supposed to believe that conservatives want to see every adult in the workforce and every child raised in a daycare center? Of course not," Stone said.

Furthermore, he noted, because the AFA would be nearly universal, it could be considered a benefit similar to Social Security or Roth IRAs, rather than a welfare hand-out.

"A simple, flat child allowance with a high phase-out will have only very modest work-discouraging effects, and mostly among married moms who want to raise their kids at home. It won't eat away at anybody's dignity for society to say 'thank you' to parents for their hard work in the form of a check," Stone wrote.

Still, the AFA is not without its flaws, Stone said. For example, it removes the requirement for those applying for the benefit to list the social security number of each child, creating the potential for fraud. How the benefit is paid for will be another source of contention between parties, he added.

The AFA is also not totally universal, and would penalize some married people who are high earners.

"By not making the child allowance fully universal, the AFA creates distortionary work incentives, marriage penalties, and it excludes high-earners, who tend to be politically influential. Adding the children of high-earning households doesn't add that much to the cost, and can solve all these problems," Stone said.

Stone believes the AFA is unlikely to pass until Democrats have both a majority in Congress, and a Democrat president. Still, he said he thinks conservatives and progressives should work together to implement the policy because of the many ways it could strengthen and benefit families.

"The American Family Act would dramatically reduce child poverty while increasing the number of children born. Those kids would be born into families of all types, but those born into married families would be more likely to benefit from having at least one parent stay home with them in their early years. That's a world I think most conservatives would like to see."