The Department of Education will no longer enforce a provision that forbids religious organizations from providing federally-funded educational services to private schools. The decision was announced in a March 11 letter addressed to congressional leadership. 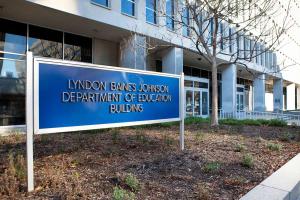 Washington D.C., (CNA) - "Those seeking to provide high-quality educational services to students and teachers should not be discriminated against simply based on the religious character of their organization," wrote Secretary of Education Betsy DeVos in the Monday letter.

"The Trinity Lutheran decision reaffirmed the long-understood intent of the First Amendment to not restrict the free exercise of religion," she wrote, referencing the 2017 Supreme Court decision in the case Trinity Lutheran Church of Columbia, Inc. v. Comer.

That decision found that the state of Missouri acted illegally in not awarding Trinity Lutheran Church a grant for resurfacing a playground located at its preschool and daycare center. The grants were awarded to similar, but non-religious, organizations. Trinity Lutheran was denied solely because it has a religious affiliation.

In the decision, written by Chief Justice John Roberts, the Supreme Court said that Missouri had violated the First  Amendment by denying the grant to to the church.

Citing the decision, DeVos said the department will stop enforcing the specific provisions in the Elementary and Secondary Education Act (ESEA)--sections 1117(d)(2)(B) and 8501(d)(2)(B)-- that prevent religious groups from providing specific services, including tutoring, special education programs, and mentoring.

The ESEA says that those enrolled in both public and private schools must receive "equitable services," which can be provided by contractors. Until the Monday announcement, those contractors could not belong to any sort of religious organization, and in the case of private schools they must be independent of the school.

In the letter addressed to Congressional leadership, DeVos said these two provisions were unconstitutional.

"After consultation with the Department of Justice, I have concluded that the requirement in ESEA sections 1117(d)(2)(B) and 8501(d)(2)(B) that an equitable services provider be 'independent of . . . any religious organization' impermissibly excludes a class of potential equitable services providers based solely on their religious status, just like the State policy that was struck down in Trinity Lutheran," said DeVos in the letter.

The secretary said that the exclusion of religious organizations by virtue of their beliefs constituted a "status-based prohibition" that "cannot be justified."

All other provisions of the ESEA, including that the equitable services provided be "secular, neutral, and nonideological" would still be enforced, DeVos said.

Mark Rienzi, president of the Becket Fund for Religious Liberty and a professor at the Catholic University of America's Columbus School of Law, told CNA that he believes the change is "actually constitutionally required."

"What the Department of Education said was they understand that the Constitution and the Supreme Court's recent decisions about the Constitution make clear that the government can't exclude religious people and religious organizations from participating in otherwise neutral programs," Rienzi told CNA.

Rienzi explained that it would be different if the government were hiring people to preach religion or to celebrate Mass, but in this case, it involves hiring teachers from a religiously-affiliated school to teach secular subjects, such as English as a second language classes.

"What the Department of Education said is that the Constitution does not allow the government to exclude religious groups and religious organizations from participating on equal terms with everybody else in those kinds of programs," he explained.

The idea that the government forbids religious groups from equal participation in programs is "just not the law," he said.

Rienzi compared the past Department of Education policy to one that would forbid the fire department from putting out a fire at a church.

"The church is a building in town just like the library, the bookstore, and the drugstore and everything else. And of course, the government can and should provide equal services and let them participate on equal terms with everybody else."