Catholic Politicians, Abortion and Communion with the Unborn

Recently, Archbishop Joseph Naumann, Archbishop of Kansas City and Chairman of the US Bishops Committee on Pro-life Activities, encouraged pro-life Catholics '" and believers from many denominations '" by writing the following words about pro-abortion public officials who identify themselves as Catholics: 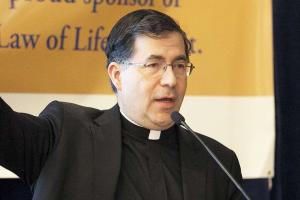 Fr. Frank Pavone, National Director, Priests for Life - "Advocating for intrinsically evil acts, like abortion, is a serious immoral act '" one that involves grave matter, the prerequisite for the commission of a mortal sin... To receive our Eucharistic Lord, while in a state of mortal sin, only further jeopardizes the eternal fate of our souls.

Sincere repentance, a conversion of heart, and a genuine effort to make amends for the harm caused by our sin, are essential to be able to receive God's mercy...In my own role as a bishop, I have a serious responsibility to make certain that those entrusted to my pastoral care are aware of the moral gravity and spiritual consequences of their actions."

He went on to say that he has requested that, for their own spiritual good and to avoid giving scandal to others, such public figures refrain from Holy Communion.

In doing so, he not only encourages the laity, who strive hard to conform their actions to their beliefs, but also encourages his brother bishops, along the lines of what the entire body of bishops wrote just over twenty years ago:

"In all cases, bishops have the duty and pastoral responsibility to continue to challenge those officials on the issue in question and persistently call them to a change of heart. As bishops we reflect particularly on the words of the Office of Readings:

"Let us be neither dogs that do not bark nor silent onlookers nor paid servants who run away before the wolf. Instead, let us be careful shepherds watching over Christ's flock. Let us preach the whole of God's plan to the powerful and the humble, to rich and to poor, to men of every rank and age, as far as God gives us the strength, in season and out of season, as St. Gregory writes in his book of Pastoral Instruction." (Living the Gospel of Life, 1998, n. 29)

The matter of how to discipline pro-abortion Catholic politicians is a matter on which bishops come to different conclusions, for different reasons. But I have always thought that the inconsistency between receiving Communion and supporting abortion has a pretty strong Biblical basis in the Sermon on the Mount.

In Matthew 5, we read these words of Jesus:

"You have heard that it was said to your ancestors, 'You shall not kill; and whoever kills will be liable to judgment.'

This has clear implications for the support of abortion. As Professor William Brennan pointed out years ago in his book, Dehumanizing the Vulnerable: When Word Games Take Lives, the oppression of the unborn follows the pattern of the oppression of many other groups throughout history inasmuch as the oppressed group is called names. Abortion supporters speak of our brothers and sisters in the womb as "non-persons," "tissue," "clumps of cells," "products of conception," and "parasites."

And Jesus warns against calling someone a "fool."

But what if we're deliberately excluding someone '" or a group of people '" from our welcome? What if, while we are seeking union with Jesus, we are resisting union with others through hatred, unforgiveness, prejudice '" or the insulting dismissal of a whole group of people as "non-persons?"

We must first reconcile with them; only then will we be prepared to offer our gift at the altar and receive the gift of Communion.

Pro-abortion public officials are not reconciled with the unborn. Not only do they call them names and look down on them, but they take actions which deprive them of the protection of their lives.

They must first be reconciled with their youngest brothers and sisters... a reconciliation that consists of an awareness that they are persons equal in dignity to the rest of us, and a resolution to protect them.

And this applies not only to public officials. All who support or promote abortion are called to reconcile first with their unborn brothers and sisters before seeking union with the Lord. Otherwise, it would be like taking the sacred host from the priest, and after saying, "Amen," breaking a piece of the host off and giving it back to the priest, saying, "Except this piece, Father."

Let us indeed welcome the whole Christ by welcoming all our brothers and sisters, born and unborn.