Why some Camp Fire victims don't ask for help, and what parishes are doing

Though a series of devastating wildfires in California is nearly contained, Catholics engaged in relief efforts are warning that the recovery process will be long, and will disproportionately affect undocumented immigrants and the poor, who may not be able to avail themselves of government-provided services. 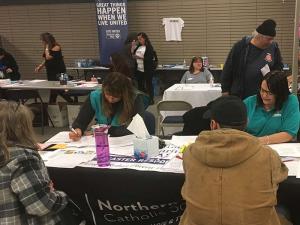 Sacramento, Calif., (CNA) -  Nearly 90 have died in the Northern California fire known as the Camp Fire, though the number of people still missing has dropped from thousands to a list of just 11. The fire began Nov. 8 and as of Dec. 3, the blaze was entirely contained, after having consumed 150,000 acres of land and 18,000 structures.

John Watkins, director of Catholic Charities for the Diocese of Sacramento, told CNA that several local aid organizations have been coordinating efforts to help survivors, setting up booths and holding events at the Disaster Resource Center (DRC) in Chico, CA.

"NVCSS will primarily be involved in the second phase of the disaster recovery with Crisis Counseling and Disaster Case Management," Watkins told CNA in an email.

"They will likely be hiring dozens of disaster case managers to respond to the Camp Fire. This may not happen for another 4-6 months. The [disaster case management] program will accompany the families for 24 months until they are stabilized."

In the meantime, Watkins said, the agency is seeking to hire a coordinator to serve families who will not qualify for federal assistance, many of whom are undocumented. He said the NVCSS immigration table at the relief center has helped at least 50 people who lost their immigration documentation in the fire.

The diocese is also providing free school tuition to about 20 students displaced by the fire.

Father Michael Ritter, pastor at St. John the Baptist parish in Chico, told CNA that over 160 members of his parish have been volunteering at the disaster center in Chico through the leadership of St. Vincent de Paul.

"They're doing intake and assessment, they're doing gift cards, we've been giving out some donated goods that we've received, and hygiene kits and whatnot...as of a couple of days ago we had done intake for more than 2,000 families," Ritter told CNA.

Ritter said the parish has its own drop-in center, open Friday evenings and Sundays, to help bring a variety of services to people in need. The need for housing, gift cards for groceries, and gasoline is still particularly acute, but prayer for the victims of the fire is also greatly needed, he said.

Ritter said for many undocumented members of the community in need, and even for legal immigrants who may have lost their documentation in the fire, there is a discomfort with approaching FEMA" a federal agency" at the DRC.

"Our hope is that the parish provides a place of greater confidence or trust, where people who maybe wouldn't be able to approach a federal agency for support can get the same kinds of service," he said.

Ritter said although the parish events and resources are meant to provide help for anyone, and are not being particularly marketed to the undocumented, it is clear that "the parish provides a safer place for people who would have concerns going directly to FEMA, or for people who FEMA wouldn't be able to help."

"What the Church does offer is help for anyone who needs help, and whether one's documented or not is not a question," he said.

"Our strength, particularly as a parish, is the human element in terms of meeting people and empathy, and our effort to be present...It really is incredible to be a witness to some of the great solidarity that we're seeing. This has definitely changed the culture of Butte County."

Outside of Chico, the small California city of Paradise was almost completely destroyed by the fire. Nearly all the buildings belonging to St. Thomas More Parish succumbed to the blaze.

Jim Collins, leader of relief efforts at the parish, said volunteers have set up a call center to contact parishioners who are still unaccounted for. As of last week, the volunteers had made contact with just twenty percent of the parish list; the rest were unaccounted for, or had likely lost their landline service in the fire.

"We have an expectation of about 80% [of our 800 parishioners] burned out of their homes, and maybe 20% [of their homes] still standing," Collins told CNA. "About 80% across the board have lost everything."

"What we'd like to do now is to direct donations to those most in need, so we worked out kind of a triage to identify those most in need who would normally be those who did not own homes, who were living in rentals that were totally destroyed, and have no insurance compensation coming," Collins said.

"And also those living in trailers or trailer parks, and that's a substantial number of our parishioners because it's kind of a low-income area up in Paradise."

Ritter said that ongoing support will be important for people in communities like Paradise.

Although there is generally "a huge and very emotional" outpouring of support for victims of a disaster within the first 48 hours, he said, resources will still be needed in six months or a year after the fire.

While individuals and corporations have made generous donations in response to the disaster, "my big ask for people is not to lose that enthusiasm because we're talking about many months or even years for a real recovery here," he said.

"The need for aid is going to be just as real [six months or a year from now] as it is now."