45th Annual March for Life: What happened at this year's important march?

They came from across the country and the globe to Washington, DC. for one purpose: to stand in solidarity with unborn children. 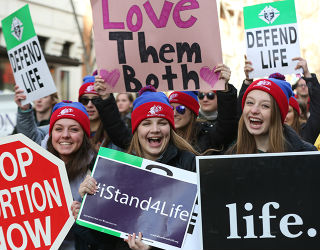 Washington D.C. (CNA/EWTN News) - With a quite a few groups donned in matching hats and scarves - quickly rendered unnecessary due to the unseasonably warm January day - and clutching some innovative signs, the 45th annual March for Life went off without a hitch Jan. 19.

While the rally made history as President Donald Trump became the first sitting president to address the march via livestream video, the individual marchers to whom Catholic News Agency spoke over the course of the day were more concerned with the need to protect the unborn and to promote the dignity of life.

And they were big fans of the nice weather, of course.

The crowd was overwhelmingly young, and large groups from all over the country were spotted on the National Mall. A group of around 400 from Baton Rouge, La., made an impressive entrance, and the wave of white hats continued as far as the eye could see.

The University of Mary had a three-bus contingent of about 150 students, faculty, and staff, who made the 30-hour car ride to Washington, D.C from Bismarck. The prospect of a long bus ride didn't sway UMary junior Mary Kampa, who was returning to DC for her second March for Life in a row.

"Knowing that it's not about the bus ride, and it's not about me, and it's for something much greater - standing up for the dignity of life," Kampa told CNA. "I want to be a voice for the voiceless," she continued.

Last year, the University of Mary contingent led the march. Kampa said that was an honor. This year, 20 students were present in the Rose Garden for Trump's address.

And true to form, some UMary students were clad in short-sleeved shirts prior to the start of the pre-march rally. Kampa wasn't surprised by this, considering the weather her and her classmates had left behind in North Dakota.

"It was negative 20 [degrees] last Sunday, so this is awesome," she said, laughing.

Another big fan of the weather was Ave Maria University student John-Paul Arias. Arias was at his first March for Life, and unlike many of his classmates who were in DC, he flew up.

Arias said he thought it was important for men to "defend the life that we helped create," and that they too had an important role in the pro-life movement. He said he was thrilled to be in Washington, and very excited to be at the march.

And despite AMU's location in southwest Florida, it was somehow warmer in DC on Friday.