Free World Class Education
FREE Catholic Classes
What was Trump doing while hundresds of thousands of women rallied against him?

Pop star Madonna was one of several celebrities attending the Women's March on Washington Saturday, January 21, just one day after Donald Trump was sworn into the Presidency. 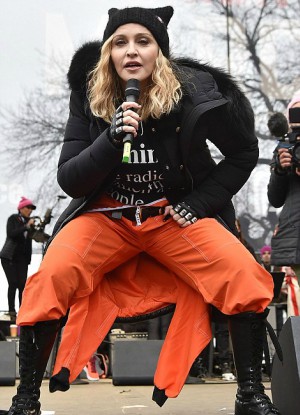 Madonna admits before a crowd of thousands that she has considered "blowing up the White House."

She began by asking the crowd, "Are you ready to shake up the world?"

Her question was met with thousands of voices crying in unison, "Yes!"

"Welcome to the revolution of love," she continued, "to the rebellion, to our refusal as women to accept this new age of tyranny where not just women are in danger, but all marginalized people - where being uniquely different, right now, may truly be considered a crime.

"It took this horrific moment of darkness for us to wake us the **** up. It seems - it seems as though we had all slipped into a false sense of comfort, that justice would prevail and that good will win in the end.

"Well, good did not win this election but good will win in the end. So what, today, means is that we are far from the end. Today marks the beginning, the beginning of our story. The revolution starts here.

"The fight for the right to be free, to be who we are, to be equal. Let's march together through this darkness and with each step, know that we are not afraid. That we are not alone. That we will not back down. That there is power in our unity and that no opposing force stands a chance in the face of true solidarity.

"As the poet W. H. Auden once wrote on the eve of World War II, 'We must love one another or die.'

The pop queen then sang "Express Yourself" and dedicated the next song, "Human Nature," to President Trump, saying "the new D.T. in the White House. 'D' could stand for dick. I don't know."

She was wearing a "p****hat," a knitted beanie with two cat ears, which have since become the unofficial march accessory.

According to Daily Mail, the Secret Service reported they will open an investigation into Madonna's claim of thinking "about blowing up the White House."

The Gateway Pundit reported a spokesman for the Secret Service claimed the agency is aware of Madonna's comment and an investigation will be opened. Regardless of the investigation results, it is up to the U.S. Attorney's office to decide whether to prosecute the aging pop star.

Like many of the celebrities appearing at the Women's March on Washington, Madonna called for change and claimed the march was just the beginning of the revolution. 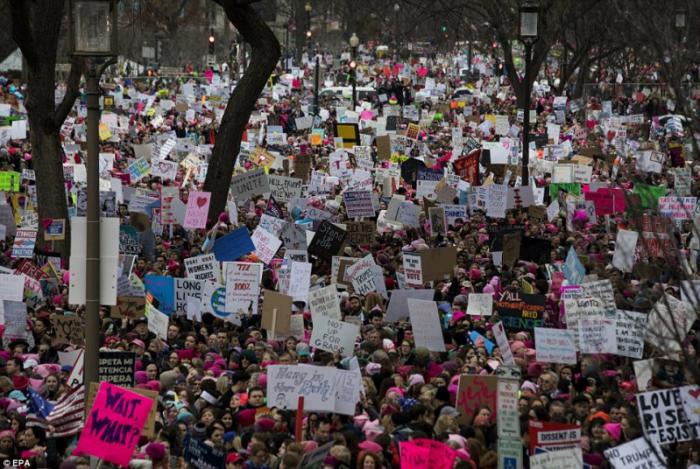 500,000 people were in attendance at the Women's March on Washington (EPA).

What she thinks Trump will do to limit women's rights and freedoms remains uncertain, though she implied Trump will somehow strip all women of their Constitutional rights and "the right to be who [they] are."

There were an estimated half-million people in attendance for the march, most of whom enthusiastically sided with the celebrities calling for love's prevalence over hate.

When actress Ashley Judd took the stage, she passionately recited a poem Nina Donavan, a 19-year-old teenager from Tennessee, wrote, which references several things Donald Trump has said in the past.

She spoke of "confederate flags being tattooed across my city" and said, "the South actually is going to rise again, maybe for some it never fell."

The impassioned poem was met with the cries of the audience and Judd's theatrical performance.

Cher, America Ferrera, Scarlett Johanesson, Alicia Keys and Amy Schumer also made appearances, with each delivering a speech claiming the march's core purpose was to unite as one to protest President Donald Trump.

While women across the country continue to claim Trump will magically revoke all their rights now that he has become President of the United States, he spent his second day in office focused at the tasks at hand.' 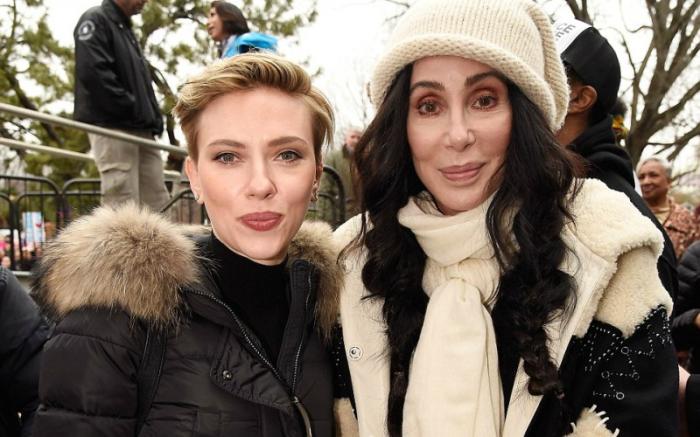 Several celebrities were in attendance (WireImage).

First he attended a prayer service at Washington's National Cathedral, then traveled to CIA headquarters, where he attended a briefing from senior agency leaders. While there, he spoke to several hundred people before the wall of honor, where fallen operatives are commemorated with stars.

"This is my first stop officially, there is nobody that feels stronger about the intelligence community and the CIA than Donald Trump. There is nobody," he stated. "I am so behind you and I know that maybe sometimes you haven't got the backing that you wanted. I have a running war with the media, they are among the most dishonest human beings on Earth -- they sort of made it sound like I had a feud with the intelligence community. The reason you are the number one stop is exactly the opposite."