Free World Class Education
FREE Catholic Classes
Archbishop Kurtz - Mandating marriage redefinition across the country is a tragic error that harms the common good and most vulnerable among us, especially children. The law has a duty to support every child's basic right to be raised, where possible, by his or her married mother and father in a stable home.

There have been numerous statements and articles written about the very disappointing (but not surprising) gay "marriage" ruling handed down by the U.S. Supreme Court. Most notable was the excellent statement issued by Archbishop Joseph E. Kurtz of Louisville, Kentucky, president of the U.S. Conference of Catholic Bishops. Here is an excerpt ---- Regardless of what a narrow majority of the Supreme Court may declare at this moment in history, the nature of the human person and marriage remains unchanged and unchangeable. Just as Roe v. Wade did not settle the question of abortion over forty years ago, Obergefell v. Hodges does not settle the question of marriage today. 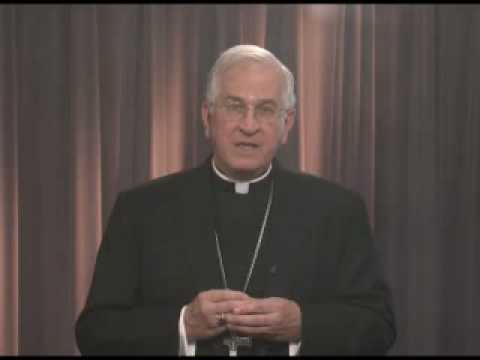 CHICAGO, IL (Catholic Online) - There have been numerous statements and articles written about the very disappointing (but not surprising) gay "marriage" ruling handed down by the U.S. Supreme Court. Most notable was the excellent statement issued by Archbishop Joseph E. Kurtz of Louisville, Kentucky, president of the U.S. Conference of Catholic Bishops:

"Neither decision is rooted in the truth, and as a result, both will eventually fail. Today the Court is wrong again. It is profoundly immoral and unjust for the government to declare that two people of the same sex can constitute a marriage."

"The unique meaning of marriage as the union of one man and one woman is inscribed in our bodies as male and female. The protection of this meaning is a critical dimension of the 'integral ecology' that Pope Francis has called us to promote.

"Mandating marriage redefinition across the country is a tragic error that harms the common good and most vulnerable among us, especially children. The law has a duty to support every child's basic right to be raised, where possible, by his or her married mother and father in a stable home."

"Jesus Christ, with great love, taught unambiguously that from the beginning marriage is the lifelong union of one man and one woman. As Catholic bishops, we follow our Lord and will continue to teach and to act according to this truth."

"I encourage Catholics to move forward with faith, hope, and love: faith in the unchanging truth about marriage, rooted in the immutable nature of the human person and confirmed by divine revelation; hope that these truths will once again prevail in our society, not only by their logic, but by their great beauty and manifest service to the common good; and love for all our neighbors, even those who hate us or would punish us for our faith and moral convictions.

"Lastly, I call upon all people of good will to join us in proclaiming the goodness, truth, and beauty of marriage as rightly understood for millennia, and I ask all in positions of power and authority to respect the God-given freedom to seek, live by, and bear witness to the truth".

Sadly, prominent author and commentator Father James Martin, S.J., was not the least bit disappointed in the ruling. Although he never explicitly praised it, he posted the following message on his Facebook page:

"NB: No ad hominem. No uncharitable remarks whatsoever about any person or group. No homophobic remarks. Mo more than one or two posts per person. And Catholics who disagree with the Supreme Court decision must treat gays with 'respect, compassion and sensitivity,' as the Catechism asks."

"The U.S. Conference of Catholic Bishops has responded to the Supreme Court decision to uphold same-sex marriage.... For a very different reaction, New Ways Ministry, an organization that ministers to LGBT Catholics, released a statement in which they 'rejoice' over the decision."

"No issue brings out so much hatred from so many Catholics as homosexuality. Even after over 25 years as a Jesuit, the level of hatred around homosexuality is nearly unbelievable to me, especially when I think of all of the wonderful LGBT friends I have."

"The Catholic church [sic] must do a much better job of teaching what the Catechism says: that we should treat our LGBT brothers and sisters with 'respect, sensitivity and compassion.'"

"But God wants more. God wants us to love. And not a twisted, crabbed, narrow tolerance, which often comes in the guise of condemnations, instructions and admonitions that try to masquerade as love, but actual love."

"Love means: getting to know LGBT men and women, spending time with them, listening to them, being challenged by them, hoping the best for them, and wanting them to be a part of your lives, every bit as much as straight friends are part of your lives. Love first. Everything else later. In fact, everything else is meaningless without love."

Interestingly, Father Martin likes to reference the Catechism of the Catholic Church, but only a few words from the passages on homosexuality. I'll print the passages in their entirety a bit later. But before I do.

'I never experienced so much love from so many people in my life.' These words were spoken by Mr. Bill Baird, known as the 'Father of the Pro-Choice Movement.' His cases before the Supreme Court made contraception legal for single people, and paved the way for the Roe vs. Wade abortion decision and the recent gay marriage decision."

"Bill has become a friend of mine over the years, and his words I quote above were spoken after a Mass I celebrated for the National Right to Life Convention some years ago. During the mass I introduced him to the hundreds of pro-life activists who had gathered, and then said to Bill publicly, 'We respect your life as much as we respect the life of any unborn child.' And the room erupted in applause."

"The way of love is the way of Christ, and of his disciples."

"Compassion recognizes the needs of the other person, including his or her need of truth. And truth is complete only when it reveals the limitless compassion of the God who reveals himself.

"So yes, I agree with all those who call for compassion for our LGBT brothers and sisters. But to the extent that we withhold from them the truth of God's plan for love and marriage, we fail in that compassion and we do them a disservice beyond measure, robbing them of something to which they have a right. "

"As Blessed Pope Paul VI wrote in Humanae Vitae, 'To diminish in no way the saving teaching of Christ constitutes an eminent form of charity for souls' (n. 29)."

Back to the Catechism of the Catholic Church, which teaches the following on the subject of homosexuality:

"Homosexuality refers to relations between men or between women who experience an exclusive or predominant sexual attraction toward persons of the same sex. It has taken a great variety of forms through the centuries and in different cultures. Its psychological genesis remains largely unexplained.

"Basing itself on Sacred Scripture, which presents homosexual acts as acts of grave depravity, tradition has always declared that 'homosexual acts are intrinsically disordered.' They are contrary to the natural law. They close the sexual act to the gift of life. They do not proceed from a genuine affective and sexual complementarity. Under no circumstances can they be approved."

"The number of men and women who have deep-seated homosexual tendencies is not negligible. This inclination, which is objectively disordered, constitutes for most of them a trial. They must be accepted with respect, compassion, and sensitivity. Every sign of unjust discrimination in their regard should be avoided. These persons are called to fulfill God's will in their lives and, if they are Christians, to unite to the sacrifice of the Lord's Cross the difficulties they may encounter from their condition."

"Homosexual persons are called to chastity. By the virtues of self-mastery that teach them inner freedom, at times by the support of disinterested friendship, by prayer and sacramental grace, they can and should gradually and resolutely approach Christian perfection."

----------------------------------------
Matt C. Abbott is a Catholic commentator with a Bachelor of Arts degree in Communication, Media and Theatre from Northeastern Illinois University. He's been interviewed on MSNBC, NPR, WLS-TV (ABC) in Chicago, WMTV (NBC) in Madison, Wis., and has been quoted in The New York Times and the Chicago Tribune. He can be reached at mattcabbott@gmail.com.