Louis Farrakhan, leader of the Nation of Islam, has captured attention once again with fresh racist rhetoric. In an inflammatory speech delivered at Jefferson Street Missionary Baptist Church in Nashville, the Nation of Islam leader made a series of incredible comments. 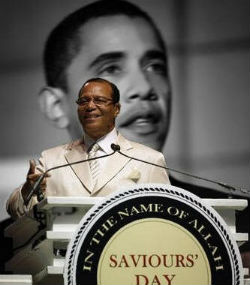 LOS ANGELES, CA (Catholic Online) - Among the gems were:

--Jesus and Mary were blacks of African descent. "Jesus, whether you want to believe it or not, was a man of color. How many of you are ready to accept Jesus as one of you? Jesus - his mother Mary was an Egyptian. Egypt is Northeast Africa."

(Author's note: Certainly, we know Jesus was not Caucasian, but Egyptian?)

--Solomon and David were black. "Jesus said in Revelations 'I am the seed of David. The root of Jesse. The bright and the morning star.' Well Jesse was the father of David. David was the father of Solomon and Solomon said 'I am black but come ye all you daughters of Jerusalem!" So if Solomon was black, David couldn't have been white."

--Interracial relationships are destroying the black race.  "White folks don't produce black children - except it's [sic] a white woman with a black man or a black man with a white woman and that's the end of your race. So you're dying a natural death these days. And without an AK47 'cause the brother ain't shooting no blanks."

--The Holy Father (and Rev. Billy Graham) knows Jesus was black. "So if Jesus was a black man and you're looking for him to return, why did they give us the image of themselves when the Pope knows that Jesus was black? Even Billy Graham said it years ago and the Pope has a black Madonna - so why did you make him white when you know he was black?"

--Republicans are "tired" of black people. "Now you conservative Republicans, you know you tired of black people. I understand because the scriptures say I'm going to vex you with the foolish people and you about vexed now. But let me tell you something about these Republicans. They've given you enough they feel and they don't want to give you no more."

-- Whites have used blacks (beyond slavery). "You saw us suffering. You knew we were wounded but you didn't have the good oil or even the will to make a better people. But you saw us in our destroyed state and you used us to your advantage without ever healing us."
And these are just the best examples from Farrakhan's screed.

Farrakhan continues to divide Americans and hurl the most absurd accusations based on hasty racial generalizations. There is no doubt that slavery was a great evil, and that there have been exceptional challenges faced by blacks even to the present day. But perhaps the greatest challenge that persists is not the distinction of race, but the insistence by the mongers of division that race should somehow matter more than as a question of personal identity.