Here's what's next in the conflict between the U.S. and Iran

Free World Class Education
FREE Catholic Classes
AS Catholics, we must pray for peace and an end to violence.

The United States has accepted responsibility for a drone strike which killed a top Iranian general and several of his aides and allies. Retaliation is likely. Here's what we can expect. 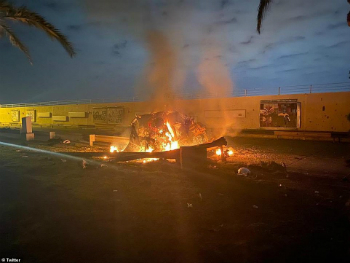 Photos shared widely on Twitter, show the wreckage of cars destroyed by hellfire missiles near Baghdad.

LOS ANGELES, CA (California Network) - Americans are urged to leave the Middle East as soon as they can, following a violent escalation in the long-simmering conflict between Iran and the United States. An American MQ-9 Reaper drone fired four "hellfire" missiles at two vehicles carrying General Qassem Soleimani and his staff. Solemani was the leader of Iran's elite Quds force which carries out unconventional military and intelligence operations around the world. The attack was so powerful, Solemani's body could only be identified by a ring he wore. He was widely regarded as the second-most powerful man in Iran and many believed he would be a likely choice for president in the future.

Iran has already convened an emergency meeting and announced there will be military and diplomatic repercussions. Several world leaders have condemned the strike. The Iraqi government has also condemned the strike as a violation of their sovereignty and an attack on Iraq itself.

The United States has considered Solemani a "most wanted" man for a long time. He sponsored and directed terrorist organizations across the Middle East. Those organizations are responsible for the deaths of thousands of Americans.

Now the strike is done, the world waits to see what will happen next.

First, Iraq is likely to request the departure of American military forces from Iraq. The United States has been training and equipping Iraq's military since the end of the last Gulf War, but these operations will probably cease immediately, if they have not already stopped. A decision will have to be made whether or not to keep American forces operating in the country against Iraq's will. It is likely the U.S. will withdraw to bases in other countries.

Israel may host some forces, as well as Saudi Arabia, but there will be consequences for anyone who does so.

It is certain that Iran will stage a military retaliation. This could start as early as today, or Iran may take time to prepare. Iran has a number of options and it is likely they will use many different tactics. They are certain to activate terror networks and their cells around the globe. Attacks across the Middle East should be expected, including in Israel. Terrorist attacks are also possible in the United States itself.

Iran's military is large and is more than capable of defending Iran in a ground war, but nobody expects the U.S. to invade. Instead, Iran will use its naval forces to close the Persian Gulf to shipping and American naval forces. It is certain that American naval assets in the region are on constant alert and are prepared to use lethal force in response to any threats. Still, Iran has a fleet of small boats which can be used to swarm civilian ships, and they have cruise missiles which can be fired at ships from the coast. Naval vessels can defend against missiles, but civilian ships will be vulnerable. It is up to Iran if they choose to use either of these capabilities. Interfering with shipping will escalate the conflict and could draw other nations such as Great Britain into the conflict.

Iran also has a significant air force, but the U.S. forces should be sufficient for defense. American naval aviators are better trained and have superior equipment including long-range air-to-air missiles which can destroy attacking aircraft from tens of miles away. The U.S. also has Air Force aircraft in the region including the F-15, which is a powerful interceptor, and the F-22, which is stealthy and difficult to detect. American bombers have the range to reach Iran from bases like Diego Garcia in the Indian Ocean. These bombers can launch cruise missiles which can fly for thousands of miles and strike with astounding precision. Finally, stealth bombers could be sortied from their base in Missouri and can loiter over Iran itself to destroy key targets without being easily detected.

Game theory suggests the U.S. should expect an attack from Iran and should already be moving to neutralize that nation's ability to make war. Immediate, preemptive airstrikes against Iran would be the equivalent of moving twice in a game and denying your opponent their turn. However, politics factor into the situation and no nation wants to be seen as encouraging conflict. So, it is unlikely the U.S. will do anything until Iran strikes back. Unfortunately, that means many vulnerable people will be endangered, which is why the U.S. is asking all Americans to depart the region.

The fact is, this conflict is just starting and it will escalate further. While the U.S. has powerful military capability, it will be constrained by political considerations as other nations withhold support, or even sympathize with Iran. Iran could easily win their main objective which is an end to the economic sanctions which have crippled their economy and a reduction of American hegemony in the region. Iran could emerge as the great power in the Middle East, even if it suffers significant military losses.

As Catholics, our duty is to pray for peace. We should especially pray for Christians in the region, who will be caught in this conflict. And we should pray for all the people in harm's way this morning, especially those deployed at sea and on bases in the region. We must also pray for the people of Iran, for many of them are needlessly suffering, and they face danger too.

Let us pray this conflict is contained, that other nations do not join, and that a peaceful resolution is swiftly found. Failing this, a long and terrible conflict is about to ensue.