Five years on from the conquering of Christian communities in Iraq by the so-called Islamic State, Christians in the country remain at the "point of extinction," Chaldean Archbishop Bashar Warda of Erbil said this week. 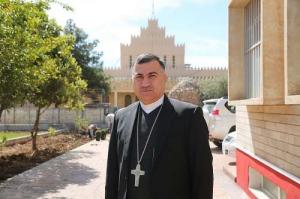 Erbil, Iraq, (CNA) - "The ISIS attack led to the displacement of more than 125,000 Christians from historical homelands and rendered us, in a single night, without shelter and refuge, without work or properties, without churches and monasteries, without the ability to participate in any of the normal things of life that give dignity; family visits, celebration of weddings and births, the sharing of sorrows," Warda told papal charity Aid to the Church in Need this week.

"This was an exceptional situation, but it's not an isolated one. It was part of the recurring cycle of violence in the Middle East over more than 1,400 years," he said.

ISIS captured the Christian communities of the Nineveh plains Aug. 6, 2014. Christians were not able to return to the area until the fall of 2016, when Iraqi forces and their allies recaptured the area. To date, about 40,000 Christians have returned; many have emigrated.

Christianity has been present in the Nineveh plain in Iraq '" between Mosul and Iraqi Kurdistan '" since the first century. However, since the ousting of former Iraqi leader Saddam Hussein, Christians have been fleeing the region.

Warda said there have been periods of tolerance between Muslims and Christians in the area. Christian engaged with Muslims in respectful dialogue from the 8th century until the 14th century, he said, helping to usher in the Arab Golden Age and a flowering of science, mathematics, and medicine.

In Warda's eyes, the imposition of sharia led to the decline of that Golden Age: "A style of scholastic dialogue had developed, and this could only occur, because a succession of caliphs tolerated minorities. As toleration ended, so did the culture and wealth which flowed from it."

Warda said Muslim leaders throughout the centuries have decided "according to their own judgement and whim" whether non-Muslims will be tolderated, and if so, to what degree.

"Argue as you will, but extinction is coming, and then what will anyone say?" he continued.

"That we were made extinct by natural disaster, or gentle migration? That the ISIS attacks were unexpected, and that we were taken by surprise? That is what the media will say. Or will the truth emerge after our disappearance: that we were persistently and steadily eliminated over the course of 1,400 years by a belief system which allowed for recurring cycles of violence against Christians, like the Ottoman genocide of 1916-1922."

Warda said there are still extremist groups in the area that believe in second-class citizenship for minorities and the enforcement of jizya. Warda said in contrast, "the basic principle of European and American life is the foundation of the Christian civic order, in which we are all children under a loving God, created in His image and likeness, which gives us all dignity, and holds that all are deserving of respect."

"The role Christian communities play, or have played, in Islamic societies has been overlooked. It is an important part of the formation of civil society in most of the world," he said.

Warda said he has a "missionary role" in Iraq, "to give daily witness to the teachings of Christ, to show the truth of Christ and to provide a living example to our Muslim neighbors of a path to a world of forgiveness, of humility, of love, of peace. Lest there be any confusion, here I am not speaking of conversion. Rather, I am speaking of the fundamental truth of forgiveness which we Christians of Iraq can share."

He said he believes that this message of forgiveness is something Christians can witness to their Muslim neighbors in the Middle East.

"We say this to our Muslim neighbors, learn this from us. Let us help you heal. Your wounds are as deep as ours ...We pray for your healing. Let us heal our wounded and tortured countries together," he said.

Warda called on Muslim leaders to acknowledge that changes need to be made to protect religious minorities.

"It is not enough to say, 'ISIS does not represent Islam.' We need more."

"I would encourage Muslim countries to come and step forward in helping by rebuilding Christian villages, Yazidis villages, to show some sign of solidarity," Warda said.

Warda urged Western societies to "understand the nature of the battle" going on in Iraq.

"Will the West continue to condone this never-ending, organized persecution of minorities?" he asked.

"When the next wave of violence begins to hit us, will anyone on your campuses hold demonstrations and carry signs that say, "We are all Christians?" And yes I do say, the ďż˝~next wave of violence,' for this is simply the natural result of a ruling system that preaches inequality and justifies persecution."