The Eritrean Catholic Church has criticized the government of the one-party state for seizing and closing its 22 health clinics throughout the country last week. 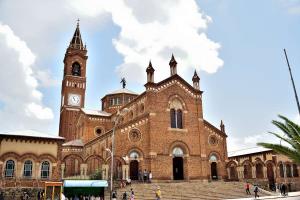 Asmara, Eritrea, (CNA) - "The government can say it doesn't want the services of the Church, but asking for the property is not right," read a letter from the Church to the Eritrean health ministry, the BBC reported June 17.

The Church added that its social services cannot be characterized as opposition to the government.

In seizing the clinics, patients were told to return to their homes, and military are guarding the buildings.

Of the 22 Catholic clinics in Eritrea, eight are in the Eritrean Eparchy of Keren alone, where they serve an estimated 40,000 patients annually.

According to the BBC, analysts believe the seizures were retaliatory, after the Church in April called for reforms to reduce emigration. The bishops had also called for national reconciliation.

Government seizure of Church property is not new, however.

A 1995 decree restricting social and welfare projects to the state has been used intermittently since then to seize or close ecclesial services.

Christian and Muslim schools have also been closed under the 1995 decree, according to the US Commission on International Religious Freedom's 2019 annual report.

Eritrea's human rights record has frequently been deplored, and the nation has been designated a Country of Particular Concern for its religious freedom abuses by the US Department of State since 2004.

Many Eritreans, especially youth, emigrate, due to a military conscription, and a lack of opportunities, freedom, education, and health care.