Pope Francis: Catholics and Orthodox are united by 'ecumenism of blood'

In Bulgaria Sunday, Pope Francis said Catholics and Orthodox are united by the blood of the martyrs and the Christians who continue to suffer for the faith even today. 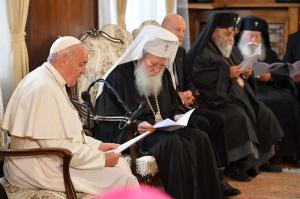 Sofia, Bulgaria, (CNA) - "How many Christians in this country endured suffering for the name of Jesus, particularly during the persecution of the last century! The ecumenism of blood!" the pope said May 5.

Addressing Patriarch Neophyte, the head of the Bulgarian Orthodox Church, and the Holy Synod, he said, "On this journey, we are sustained by great numbers of our brothers and sisters, to whom I would especially like to render homage: the witnesses of Easter."

Pope Francis met Patriarch Neophyte and the Holy Synod of the Bulgarian Orthodox Church on a May 5-7 visit to Sofia and Rakovski, Bulgaria, and to Skopje, North Macedonia.

"I believe," Francis continued, "that these witnesses of Easter, brothers and sisters of different confessions united in heaven by divine charity, now look to us as seeds planted in the earth and meant to bear fruit."

"While so many other brothers and sisters of ours throughout the world continue to suffer for their faith, they ask us not to remain closed, but to open ourselves, for only in this way can those seeds bear fruit," he stated.

The "ecumenism of the poor," he said, is the call "to journey and act together in order to bear witness to the Lord, particularly by serving the poorest and most neglected of our brothers and sisters, in whom he is present."

The meeting with Orthodox leaders was followed by a visit to the Patriarchal Cathedral of Aleksander Nevsky and a moment of silent prayer before the altar dedicated to Saints Cyril and Methodius.

Afterward, the pope led the Regina Coeli from a square outside the church.

Leading the prayer before an icon of Our Lady of Nessebar, whose name means "Gate of Heaven," Francis asked the Blessed Virgin Mary to intercede before the Risen Lord, that he may grant Bulgaria "the necessary impulse always to be a land of encounter."

"A land in which, transcending all cultural religious and ethnic differences, you can continue to acknowledge and esteem each other as children of the one heavenly Father."

The pope addressed the Catholics and Orthodox present with "Christos vozkrese," which is Bulgarian for "Christ is risen."

"These words express great joy for the triumph of Jesus Christ over evil, over death. They are an affirmation and a testimony of the very heart of our faith: Christ is alive! He is our hope, and in a wonderful way he brings youth to our world. Everything he touches becomes young, new, full of life," he said.

"This faith in Christ, risen from the dead, has been proclaimed for two thousand years in every part of the world, thanks to the generous missionary effort of so many believers," he continued, "called to give themselves completely and selflessly to the spread of the Gospel."