Can the Church foster peace in the Holy Land?

As conflict has erupted once again between Israelis and Palestinians in East Jerusalem, the Latin Patriarchal Vicar said that the Catholic Church has a unique role to play in bringing about justice and peace. 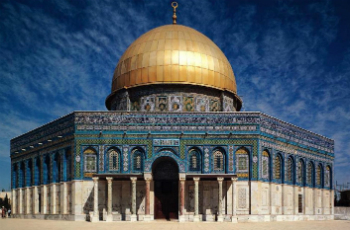 Jerusalem (CNA/EWTN News) - "When two religious communities lay claim to the same area, we have a recipe for disaster, particular when members of the two communities are also involved in a political, territorial and historical conflict," Fr. David M. Neuhaus told CNA July 24.

"The Church has a very special vocation in Israel/Palestine. Without power of any kind, the Church is free from playing political games and can be a voice that speaks out for truth, justice and peace."

The Church has important assets "to contribute to building a reality of justice and peace instead of the war and violence that dominate," he said.

The site known to Jews as the Temple Mount and to Muslims as Haram al-Sharif, where the al-Aqsa Mosque is located, was the scene of another round of violence last week when Israeli authorities installed metal detectors at the entrances of the mosque.

Palestinian objection to the metal detectors manifested in mass protests and escalated to include the killing of three Israelis at a Jewish settlement July 21. Four Palestinians were killed in East Jerusalem and the West Bank.

Fr. Neuhaus said that it can be very difficult to discern what is true and false in the conflict because each side has its own vision of what is happening.

"Why is it so difficult to find a solution to this conflict? Perhaps one part of the difficulty is that each one of the two sides believes in the total justice of its cause and is unwilling to listen with empathy to the other side," he said.

In the face of these clashes, the Church's political neutrality has an important role to play, stemming from two important assets, he emphasized.

"One is the Church's way of speaking, formulating words carefully, words that are built on truth, that teach respect and that promote justice and peace. This language is not diplomatic but rather language that works for reconciliation in the respect of truth."

The second comes from the Church's "vast network" of institutions, including schools, universities, hospitals, and homes for the elderly, orphans, the handicapped, and more, he said.

"In these institutions, the discourse of the Church is incarnated as the institutions serve one and all with no discrimination, showing that coexistence in mutual respect is not only possible but is the way forward that can open up the future, offering hope for the next generation."

Palestinians claim the metal detectors were a way for Israel to enact more control over access to the site, which is governed by a status quo arrangement which Israel has said it will maintain.

East Jerusalem has been occupied by Israel since its victory in 1967's Six-Day War.

Israelis seem to live in perpetual fear and Palestinians in unrelenting anger, Fr. Neuhaus said. "Unfortunately, those who speak the language of reason and understanding are unable to garner the support of the masses, who buy into the simplistic slogans of the dominant political elites."

The political authority in Israel "repeats that it is not changing the status quo and insists on this particularly in front of the international community," Fr. Neuhaus said.

But at the same time, there are radicals in Israel "who explicitly endorse a change in the status quo" and have been supported in instances by government ministries.

"The central problem is not restricting access to Al-Aqsa but rather the fear that the Israelis seek to replace Al-Aqsa with a Jewish Temple."

"Any change to the status quo, however minor, is perceived as preparation for a hidden master plan that Palestinians (and the entire Muslim world) formulate as their worst nightmare. The Israelis are fully aware that this is the case as every threat to the status quo has erupted in similar violence in the past."

Though the status quo for Christians and their holy places (like the Church of the Holy Sepulchre) is less threatened, the conflict between Palestinians and Israelis only serves to worsen the political divide already present among Christians -- split between those who are Arabs and thus form one with their Muslim brothers and sisters, and those integrated with the Jewish side.

"Nonetheless, Jewish extremists have manifested their refusal to coexist with Christians in the Holy Land through attacks on churches and other Christian holy sites," Fr. Neuhaus explained.

Because Christians only make up 2-3 percent of the overall population, they are particularly vulnerable under the ongoing instability and violence, he continued, but "Christians are determined to struggle for full integration in their society, whether Palestinian or Israeli, demanding equal rights and mutual respect."

"In times of conflict, the Christians are even more insistent in their prayers for peace."