Querida Amazonia: What Pope Francis said, and didn't, on priesthood and marriage

While Pope Francis was expected to focus in the apostolic exhortation published today on a proposal to ordain married priests in the Amazon region, the pope instead emphasized the importance of collaboration in apostolic ministry by Catholics in various states of life. 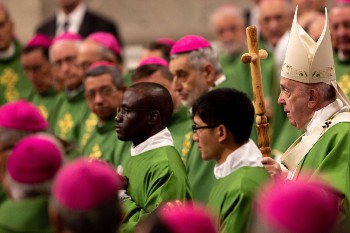 Vatican City, (CNA) - While Pope Francis was expected to focus in the apostolic exhortation published today on a proposal to ordain married priests in the Amazon region, the pope instead emphasized the importance of collaboration in apostolic ministry by Catholics in various states of life.

"Efforts need to be made to configure ministry in such a way that it is at the service of a more frequent celebration of the Eucharist, even in the remotest and most isolated communities," Pope Francis wrote in Querida Amazonia, released publicly Feb. 12 and dated Feb. 2.

The pope said that "In the specific circumstances of the Amazon region, particularly in its forests and more remote places, a way must be found to ensure" priestly ministry.

The urgent need for priests "leads me to urge all bishops, especially those in Latin America, not only to promote prayer for priestly vocations, but also to be more generous in encouraging those who display a missionary vocation to opt for the Amazon region," he wrote.

Even while emphasizing the importance of priestly ministry in the region, Pope Francis did not endorse a proposal from some bishops in the Amazon region to permit the ordination of married men to the priesthood.

Regarding that proposal, in a Feb. 12 editorial, the Vatican's editorial director Andrea Tornielli wrote that "the Successor of Peter, after praying and reflecting, has decided to respond not by foreseeing changes or further possibilities of exceptions from those already provided for by current ecclesiastical discipline, but by asking that the essentials be the starting point," for discussions regarding priestly ministry in the Amazon.

The pope's own discussion of ministry in the Amazon appeared in his exhortation's fourth chapter, "An Ecclesial Dream," in which Pope Francis treated his desire for "Christian communities capable of generous commitment, incarnate in the Amazon region, and giving the Church new faces with Amazonian features."

The chapter discussed the need to proclaim the gospel in the region; various means of inculturation; the strength and gifts of women; and ecumenical and interreligious coexistence.

Treating the inculturation of forms of ministry, the pope said that it "should also be increasingly reflected in an incarnate form of ecclesial organization and ministry," asking: "how can we not consider an inculturation of the ways we structure and carry out ecclesial ministries?"

In addition to configuring ministry for more frequent celebrations of the Eucharist, he said there "is also a need for ministers who can understand Amazonian sensibilities and cultures from within."

Priestly formation, he said, "develops distinctive traits in different parts of the world," and he noted that "what is most specific to a priest" is his configuration to Christ the priest through Holy Orders.

He noted that "power" is not the defining character of priesthood, and referred to St. John Paul II's statement in Mulieris Dignitatem that the priesthood is "totally ordered to the holiness of Christ's members."

The priest's great potency, he said, is to say Mass. He identified Mass and Confession as the sacraments that "lie at the heart of the priest's exclusive identity." He noted that "It is also proper to the priest to administer the Anointing of the Sick."

Laity "can proclaim God's word, teach, organize communities, celebrate certain sacraments, seek different ways to express popular devotion and develop the multitude of gifts that the Spirit pours out in their midst," the pope said, while adding that "they need the celebration of the Eucharist because it 'makes the Church'."

Because the Christian community grows from the Mass, "every effort should be made to ensure that the Amazonian peoples do not lack this food of new life and the sacrament of forgiveness," Francis said.

In addition to asking that bishops generously encourage missionaries to the Amazon, he said that the "structure and content" of priestly formation should "be thoroughly revised, so that priests can acquire the attitudes and abilities demanded by dialogue with Amazonian cultures."

"This formation must be preeminently pastoral and favour the development of priestly mercy," he added, noting that the lack of seminaries for indigenous people was mentioned at the synod.

The Mass, Pope Francis said, "signifies and realizes the Church's unity," which "welcomes the abundant variety of gifts and charisms that the Spirit pours out."

The Mass thus "requires the development of that rich variety."

To that end, "Priests are necessary, but this does not mean that permanent deacons (of whom there should be many more in the Amazon region), religious women and lay persons cannot regularly assume important responsibilities for the growth of communities."

"Consequently, it is not simply a question of facilitating a greater presence of ordained ministers who can celebrate the Eucharist. That would be a very narrow aim, were we not also to strive to awaken new life in communities. We need to promote an encounter with God's word and growth in holiness through various kinds of lay service."

An inculturated Church in the Amazon "requires the stable presence of mature and lay leaders endowed with authority and familiar with the languages, cultures, spiritual experience and communal way of life in the different places, but also open to the multiplicity of gifts that the Holy Spirit bestows on every one," he said.

"This requires the Church to be open to the Spirit's boldness, to trust in, and concretely to permit, the growth of a specific ecclesial culture that is distinctively lay. The challenges in the Amazon region demand of the Church a special effort to be present at every level, and this can only be possible through the vigorous, broad and active involvement of the laity."

The pope also highlighted consecrated life and base communities, which is a term used to describe small Christian communities in the Amazon region.

He encouraged "the growth of the collaborative efforts being made through the Pan Amazonian Ecclesial Network and other associations" to implement the proposal made at the Fifth Episcopal Conference of Latin America at Aparecida in 2007 to "establish a collaborative ministry among the local churches of the various South American countries in the Amazon basin, with differentiated priorities".

The Pan Amazonian Ecclesial Network, or REPAM, lists among its works "protection for the 137 'contactless tribes' of the Amazon and affirmation of their right to live undisturbed."

Francis also said that " the Amazonian region sees a great deal of internal mobility" and migration, and thus "thought should be given to itinerant missionary teams and 'support provided for the presence and mobility of consecrated men and women closest to those who are most impoverished and excluded'."