Vatican has 'no information' on GĂ¤nswein leave of absence report

After a German Catholic weekly reported that Archbishop Georg GĂ¤nswein was asked to take a leave of absence from his position as head of the papal household, the Vatican has said it cannot confirm the report, and the archbishop is still in his job. 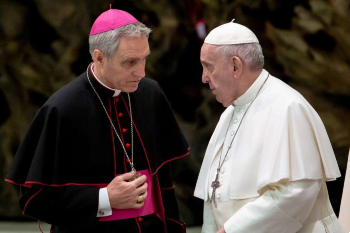 Vatican City, (CNA) - After a German Catholic weekly reported that Archbishop Georg GĂ¤nswein was asked to take a leave of absence from his position as head of the papal household, the Vatican has said it cannot confirm the report, and the archbishop is still in his job.

Die Tagespost reported Feb. 5 that the German archbishop had recently been asked by Pope Francis to "focus on his role as private secretary to pope emeritus Benedict XVI."

A Vatican source told CNA that the Die Tagepost report was on the mark. GĂ¤nswein has been requested to "stay away from his office [as prefect of the papal household] indefinitely," the source said.

But the Holy See press office told CNA Wednesday that it has "no information" regarding Ganswein being on a leave of absence from the prefecture.

Regarding the archbishop's absence from papal audiences in recent weeks, the press office stated "it is due to an ordinary redistribution of the various commitments and duties of the Prefect of the Papal Household, who, as you know, is also the personal secretary of the Pope emeritus."

In January, GĂ¤nswein was absent for several weeks from his usual official seat at public appearances of the pope - such as the general audiences on Wednesdays - due to being ill with bronchitis.

GĂ¤nswein's continued absence in the immediate wake of controversy over a new book on priestly celibacy written by Cardinal Robert Sarah and Benedict XVI, led to speculation the personal secretary of the pope emeritus had been removed as head of the papal household for this reason.

Fr. Leonardo Sapienza, regent of the prefecture, has been filling in for GĂ¤nswein at general audiences as representative of the papal household.