Pope Francis denounced rising anti-Semitism Wednesday as an attitude that is inhumane and unchristian. 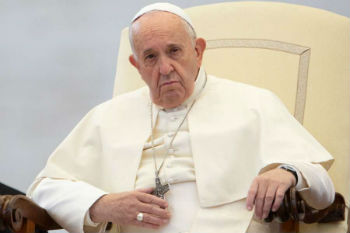 "The Jewish people have suffered so much in history ... And, in the last century, we saw so many brutalities on the Jewish people and we thought that this was over," Pope Francis said in St. Peter's Square Nov. 13.

"Today the practice of persecuting the Jews has begun again here and there. Brothers and sisters, this is neither human nor Christian. The Jewish people are our brothers, and they should not be persecuted," the pope said in a departure from his prepared remarks.

Anti-Semitic violence and harassment has been on the rise in Europe, particularly in Germany, the Netherlands, and Belgium, according to the European Union Agency for Fundamental Rights.

In October, a man with anti-Semitic beliefs shot and killed two people at a synagogue in Germany on Yom Kippur, and last year a far-right extremist attacked the Tree of Life synagogue in Pittsburgh, killing 11 people.  Other deadly attacks on a Jewish supermarket and a school in France in recent years were linked to the Islamic State and Al-Qaeda.

The pope's comments were a part of his reflection on the Biblical account of the expulsion of the Jewish people from Rome by Emperor Claudius in the first century.

The Acts of the Apostles describes how this order affected a married couple, Priscilla and Aquila, who were forced to move from Rome to Corinth.

"These spouses prove to have a heart full of faith in God and generous towards others, capable of making room for those who, like them, experience the condition of a foreigner," he said.

By welcoming Paul into their home in Corinth, Aquila and Priscilla also welcomed the Gospel of Christ, the pope said. "From that moment their home is imbued with the fragrance of the living Word that vivifies the hearts."

The home of Priscilla and Aquila became a "house church" for the local Christian community to listen to the Word of God and celebrate the Eucharist, Francis said.

"Even today in some countries where there is no religious freedom and there is no freedom for Christians, Christians gather in a home, some hidden, to pray and celebrate the Eucharist. Even today there are these houses, these families that become a temple for the Eucharist," the pope added.

In his ongoing weekly catechesis on the Acts of the Apostles, Pope Francis described how Aquila and Priscilla traveled with Paul on a missionary journey to Ephesus, and later returned to Rome.

The pope noted that this married couple were among the recipients of Paul's letter to the Romans, where St. Paul described them as "my fellow workers in Christ Jesus, who risked their own necks to save my life."

"How many families in times of persecution risk their necks to keep the persecuted hidden," the pope added. "This is the first example: family hospitality, even in bad times."

Pope Francis prayed, asking God to "pour out his Spirit on all Christian couples so that, following the example of Aquila and Priscilla, they will be able to open the doors of their hearts to Christ and to their brothers and transform their homes into domestic churches."

"A house is a domestic church, in which to live communion and offer the worship of a life lived in faith, hope and charity. We must pray to these two saints Aquila and Priscilla, so that they teach our families to be like them," Pope Francis said.