Pope Francis asks for prayer for persecuted Christians in Ethiopia

Pope Francis Sunday asked for prayer for persecuted Orthodox Christians in Ethiopia, who have been targeted in ongoing ethnic clashes that have left 78 people dead. 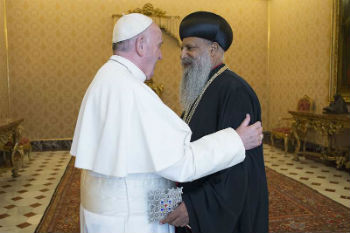 Vatican City, (CNA) - Pope Francis Sunday asked for prayer for persecuted Orthodox Christians in Ethiopia, who have been targeted in ongoing ethnic clashes that have left 78 people dead.

"I am saddened by the violence of which Christians of the Tewahedo Orthodox Church of Ethiopia are victims," Pope Francis said in his Angelus address Nov. 3.

"I express my closeness to this beloved church and her patriarch, dear brother Abune Mathias, and I ask you to pray for all the victims of violence in that land," he said.

Since violent protests broke out in Ethiopia's Oromia region Oct. 23, more than 400 people have been arrested and 78 have died, according to the office of Prime Minister Abiy Ahmed.

The Orthodox Christian community has been a target of violence in Oromia. A church official told AFP Africa that 52 Orthodox Ethiopians, including two church officials, have been killed in the violence since the protests began in October.

Hand grenades were thrown into churches in Bale Robe and Dodola, and the homes and businesses of Christians have been set on fire, according to local Ethiopian Borkena news.

The Patriarch of the Ethiopian Orthodox Tewahedo Church Abune Mathias delivered a speech Oct. 28 calling for peace and grieving the dead.

"I carry a cross in my hand, not a gun. My children, I am tearfully praying to our God about your suffering. I am also continuing to plead with the government," Mathias said, according to local Ethiopian media.

"Today I am deeply grieved. I have the urge to weep like a child ... In the hopes day to day for improvement, we have been asking the government to put a stop to it. However we have seen nothing change," the patriarch said.

The protests were sparked by an allegation by political activist Jawar Mohammed that the Ethiopian government had attempted to arrest him.

"God is with us," Orthodox priest Markos Gebre-Egziabher said at a memorial service Oct. 26 for Christians killed in Addis Ababa, according to AFP.

"If they come with machetes, we will go with crosses," Father Markos said.

The Ethiopian Orthodox Tewahedo Church is the largest of the Oriental Orthodox Churches. These Churches reject the 451 Council of Chalcedon, and its followers were historically considered monophysites - those who believe Christ has only one nature - by Catholics and the Eastern Orthodox.

Pope Francis met with Ethiopian Orthodox Patriarch Abune Mathias in Feb. 2016, and expressed his condolences for the Ethiopian Christians executed by Islamic State militants in Libya in April 2015.

In an emotional speech Oct. 28, Patriarch Mathias told his persecuted community in Ethiopia:

"While I was preaching to you about peace, those that do not know peace have deprived you of peace. My children, do not hold a grudge on me. Do not think I am silent to your plight. I always weep for you. Lord, send your Judgement, or come down to us."