A European Union official who played a role in working for the release of Pakistani death row inmate Asia Bibi said the outcome shows the potential of international cooperation to promote religious freedom. 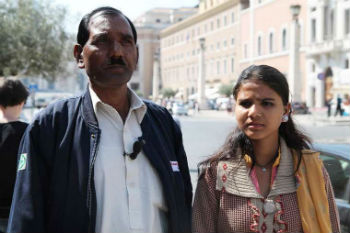 Budapest, Hungary, (CNA) - A European Union official who played a role in working for the release of Pakistani death row inmate Asia Bibi said the outcome shows the potential of international cooperation to promote religious freedom.

Jan Figel is the EU Special Envoy for Freedom of Religion outside of Europe. In an interview with CNA, he praised Bibi as "an admirably brave woman and loving mother. She did not give up her Christian faith [in exchange for freedom], and she represents encouragement for many others facing false blasphemy accusations."

Asia Bibi, a Catholic mother of five, was convicted of blasphemy in Pakistan in 2009 and sentenced to death by hanging. She was accused of making disparaging remarks about the prophet Muhammad after an argument about a cup of water. She was held on death row until October 2018 when her conviction was overturned.

After the acquittal, there were protests by Islamic hardliners, and Bibi remained in Pakistan under protective custody until May 2019. She is now in a secret location in Canada with her family.

In a new audio message this week, Bibi issued a plea that justice and judgement be treated as serious matters aimed at the pursuit of truth.

"If you want to punish someone, do not do it without listening to him. And do something for all the people in prison for blasphemy: visit them in prison, listen to them, discuss with them," she said.

According to the U.S. State Department, there are an estimated 77 people in prison in Pakistan under blasphemy laws, most of them Muslims.

Bibi said in her message she is grateful to the international community that worked for her release, and in particular to Figel, whom she described as "an angel who saved me [from] the imprisonment."

Figel told CNA that the reason Bibi remained under protective custody in Pakistan for nine months was likely because "the Imran Khan government and Pakistani Military used this delay to get the situation in the country under real control."

He lamented that under the previous government, "relatively small groups took streets hostage, and de facto dictated some decisions to the elected government. Now, leaders of militant groups and violent extremists have been jailed after massive public protests."

Figel recently launched the academic and political Declaration of Human Dignity for Everyone Everywhere.

He explained to CNA that his involvement in Bibi's case was intended to shed light on issues of religious freedom, since "Asia Bibi was famous worldwide as an evident abuse of freedom of religion and beliefs."

Figel said he was able to visit Pakistan only in December 2017, and he made a second visit in 2018.

In meeting with officials, he "spoke about the importance of dignity and justice for all Pakistanis, especially minorities" and stressed that Bibi's case was being closely watched internationally. He emphasized that the status quo of commercial relations between the EU and Pakistan was insufficient, and he asked the country to comply with international treaties that protect minorities.

Despite all the talks, Figel said that "real progress started only after summer elections in Pakistan with incoming Imran Khan government. It was brave enough to take responsibility into [its own] hands from militant groups who successfully took the State as a hostage under the previous government."

After the acquittal, Figel spoke "very fairly and very seriously" with Pakistani government officials. He also helped Bibi's family members apply for asylum in three EU countries and Canada, fearing that they also could become targets of violence.

During this time, Figel was also in contact with Bibi as she was being held in protective custody.

"With long delays due to judicial revision and no certainty on the expected full solution, she needed human and psychological support in some periods," he said.

In December, Canada formally granted asylum to Bibi and her family. Her daughters were transported immediately. After Bibi and her husband were given passports and permitted to travel, the family was reunited.

Figel hopes Bibi's story will become a basis for reform of the blasphemy law in Pakistan.

He also said the experience "proves that the EU as a soft-power can facilitate positive changes in the world in the area of justice, sustainable development, and human rights protection through more efficient Freedom of Religion and Belief promotion."

"Defense of the persecuted, the defenseless or the voiceless is our noble obligation."