Tens of thousands of people took to the streets of Belfast on Saturday to protest against the impending legalization of abortion in Northern Ireland. Pro-life advocates told CNA that they fear the proposed changes in the province could be used to legalize abortion on demand throughout the entirety of the United Kingdom. 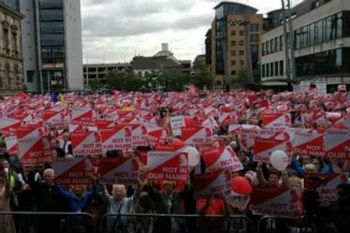 Belfast, Northern Ireland, (CNA) - Tens of thousands of people took to the streets of Belfast on Saturday to protest against the impending legalization of abortion in Northern Ireland. Pro-life advocates told CNA that they fear the proposed changes in the province could be used to legalize abortion on demand throughout the entirety of the United Kingdom.

During debate in the House of Commons, MPs from other parts of the UK voted to add provisions legalizing abortion in Northern Ireland, despite a 2016 decision by the Assembly to reject bringing abortion to the province.

The law, which will take effect on Oct. 21 unless the Assembly is able to resume operations, will also introduce same-sex marriage in Northern Ireland by 2020.

The March for their Lives was organized by the group Precious Life. They told CNA they were "heartened and encouraged" by the strong turnout, which was estimated to be over 20,000.

The people of Northern Ireland made " a strong stand against the extreme and undemocratic legislation that Westminster is forcing on Northern Ireland," said Bernadette Smyth, founder of Precious Life told CNA.

"We believe Northern Ireland is being used as a Trojan horse to push for full 'decriminalisation' of abortion across the UK, a euphemism for the full legalisation of abortion through the whole nine months of pregnancy," said Smyth.

Abortion is currently legal in Great Britain through the 24th week of a pregancy for any reason. After that time, there must be a medical reason for a woman to abort her pregnancy. The Abortion Act of 1967 introduced the practice in England, Scotland, and Wales, but its terms did not extend to Northern Ireland, where it remains illegal, with very limited exceptions. A person who is found to be guilty of performing an abortion faces up to life in prison.

Liam Gibson, the Society for the Protection of Unborn Children's (SPUC) Northern Ireland political officer, told CNA that he was not surprised people marched in protest at the thought of legal abortion unwittingly coming to Northern Ireland.

"It is no wonder so many thousands of ordinary people voted with their feet at the weekend. They have been outraged at the way their deeply held views have been ignored and the existing laws threatened by a Parliament hundreds of miles away," said Gibson.

John Deighan, deputy CEO of the SPUC, told CNA that Parliament had shown a disregard for the voters and the province's right to self-governance.

"Westminster passed the Northern Ireland (Executive Formation) Act without consulting the Northern Irish people and with no respect for devolution," Deighan said.

Devolution refers to the program of legislative reforms passed in 1999 which introduced levels of legislative autonomy for the different countries of the United Kingdom and created the Scottish Parliament and national Assemblies for Wales and Northern Ireland.

"It is a testimony to the pro-life tradition of the province that so many have taken to the streets. UK politicians have perpetrated a disgraceful injustice on the people of Northern Ireland and on the defenseless children in the womb," said Deighan. He said he hopes the new laws would spur the assembly into action.

"We can only hope that the voices of so many united for life can bring politicians to their senses. Stormont needs to be reconvened as soon as possible and ensure that the shocking laws imposed from Westminster are consigned to the political dustbin."