Cardinal George Pell will appeal his conviction to the Australian High Court, following the decision last week by the Court of Appeal in Victoria to uphold his conviction for child sexual abuse. 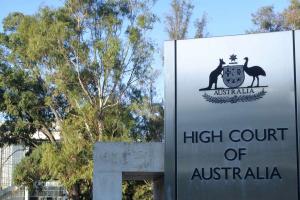 Canberra, Australia, (CNA) - Sources close to the cardinal told CNA Aug. 26 that Pell would be exercising his final appeal and that, while the majority of "special leave to appeal" cases were not granted by the High Court, his case would likely be accepted given the controversy triggered by the split decision of the Appeal Court judgement.

In seeking to take his case to the High Court in Canberra, Australia's supreme court, Pell will be exercising his last legal avenue to overturn a conviction which has divided opinion in the country and internationally.

Several Australian media outlets have reported that Pell will retain the same legal team which presented his case in Victoria, led by Brett Walker SC.

The cardinal was convicted Dec. 11, 2018, on five charges that he sexually abused two choristers after Sunday Mass while he was Archbishop of Melbourne in 1996 and 1997.

The cardinal, 78, who remains an archbishop and a member of the College of Cardinals, was returned to prison immediately after court adjourned. He has been held in solitary confinement for 176 days. Pell and has not been permitted to celebrate Mass in prison.

Pell's appeal was presented on three grounds, two of which were procedural and dismissed by all three appeal judges.

The judges were divided on Pell's primary ground of appeal, that the decision of the jury was "unreasonable."

"Even the â€~reasonable possibility' that what the witnesses who testified to these matters may have been true must inevitably have led to an acquittal," Weinberg wrote, concluding that Pell had, in effect, been asked to establish the "impossibility" of his guilt and not merely reasonable doubt.

All three judges granted further leave to appeal on the ground of the unreasonableness of the jury's conviction.

Media commentators and members of the Australian legal community have voiced concerns about the reasoning of the two-judge majority opinion and the wider implications its argumentation could have for standards of evidence in criminal trials.

Pell's legal team are expected to use the dissent issued by Weinberg as the legal blueprint for their appeal to the High Court, which must be filed within three weeks of the Appeal Court decision last week.

The decision by Pell to pursue the final legal avenue open to him means that a canonical process in Rome will be further delayed until the civil process concludes in Australia.

"As the proceedings continue to develop, the Holy See recalls that the Cardinal has always maintained his innocence throughout the judicial process and that it is his right to appeal to the High Court."