A final vote on a bill to decriminalize abortion in the Australian state of New South Wales has been delayed until the middle of September, according to local media reports. 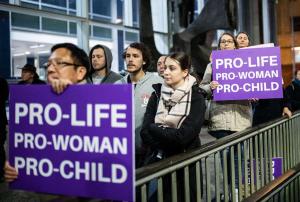 Sydney, Australia, (CNA) - The state's Legislative Council had been scheduled to debate the bill beginning Aug. 20, and the final vote will now take place the week of Sept. 17.

The Reproductive Health Care Reform Bill 2019 would allow abortions for any reason up to 22 weeks of pregnancy; after that, it would allow for abortions if two doctors believe an abortion should be performed "in light of future physical, social and psychological circumstances," according to The Guardian.

Under current law, abortion is only legal in NSW if a doctor determines that a woman's physical or mental health is in danger. "Mental health" has been interpreted by courts to include "economic and social stress."

Pro-life protestors rallied outside the parliament building after the delay was announced.

As the parliament of New South Wales opened debate on the bill Aug. 6, hundreds of pro-lifers joined a three-day prayer vigil. Archbishop Anthony Fisher of Sydney called for all Catholics to pray against the bill's passage.

The Catholic Church, the Eastern Orthodox Church, the Anglican Church of Australia, and the NSW Presbyterian Church all oppose the bill.

The bill was set to have been introduced to the state parliament July 30, and debated that week. Debate was delayed, however, after concerns it had been rushed through without proper consideration.

Despite this, the bill passed the Legislative Assembly Aug. 8 by a vote of 59-31.

According to The Catholic Weekly, the Archdiocese of Sydney's publication, the bill originally did not mandate any counseling or period of consideration for the woman.

After some revisions, the bill would now require medical practitioners to offer counselling to a woman seeking an abortion if they believe it would be beneficial, The Guardian reports.

Critics of the bill have also objected that it would require doctors with conscientious objections to refer women to other abortion providers.

The legislation would also make it a criminal offense for individuals to perform abortions without the proper authorizations, carrying a maximum penalty of seven years imprisonment for doing so. Doctors would also have to obtain "informed consent" from patients before performing abortions.

According to supporters of the bill, it clarifies what they believe were previously ambiguous terms in penal code with regard to abortion. But according to conservatives who oppose the bill, it opens up the possibility for abortion at any time for any reason as long as two doctors agree.

Tanya Davies, a Liberal Party member and fomer women's minister, introduced an amendment that would have barred sex-selective abortion. The amendment was voted down, with some legislators arguing it could lead to racial discrimination and profiling, and that sex-selective abortion "is not an issue in NSW," The Catholic Weekly reported.

Guglielmone has been the Bishop of Charleston since 2009.