A hospital boat named the "Pope Francis" set sail this week in the Amazon River to bring medical care to rural populations. 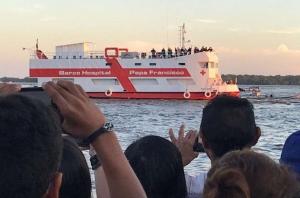 Belem, Brazil, (CNA) - "Just as Jesus, who appeared walking on water, calmed the storm and strengthened the faith of the disciples, this boat will bring spiritual comfort and calm to the worries of needy men and women, abandoned to their fate," Pope Francis said in a letter sent to mark the ship's launch Aug. 17 in Belem, Brazil.

"In addition to being a beautiful concrete gesture in view of the Synod of Bishops for Amazon, this river hospital is above all a response to the Lord's mandate, who continues to send His disciples to proclaim the Kingdom of God and to heal the sick," the pope said, according to Vatican News.

The hospital boat is the initiative of the Fraternity of Saint Francis of Assisi in the Providence of God in partnership with their local diocese and the Brazilian government.

The Brazilian Franciscans were inspired to create the floating hospital when Pope Francis visited their healthcare facility during World Youth Day in Rio de Janeiro in 2013. During the visit, the pope encouraged Friar Francisco Belotti to expand his religious order's charitable works into the Amazon region.

The boat, 32 meters in length, contains an operating room and analysis laboratory, and is able to provide a range of medical services, including X-rays, vaccinations, electrocardiogram,  mammograms, and ultrasounds. The hospital began treating its first patients Aug. 18.

"Barco Hospital Papa Francisco" will travel along the Amazon River to reach people who live in communities in the Amazon only accessible by river.

It is staffed by 20 medical volunteers, 10 crew members, and a Franciscan boat director for each 10-day voyage.

Pope Francis, who has often spoken of the Church as a "field hospital," added that the Church can also now be seen as a "hospital on the water."

The pope connected the hospital boat's launch to the upcoming Special Synod of Bishops from the Pan-Amazonian region, to be held at the Vatican Oct. 6-27. The synod's working document, entitled "Amazonia: New Paths for the Church and for an Integral Ecology," discusses the environmental and economic problems faced by Amazonian communities and pastoral approaches to the region.

"The Church cannot but worry about the integral salvation of the human person, which involves promoting the culture of indigenous peoples, talking about their vital needs, accompanying movements and joining forces to defend their rights," the synod working document states.