A group of 49 academics from universities around the world has asked the administrators of the Pontifical John Paul II Institute in Rome to reinstate several faculty members recently dismissed from the institute. 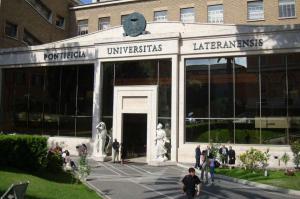 Vatican City, (CNA) - Contributors to the recently completed Dizionario su Sesso, Amore e FeconditĂ , an interdisciplinary academic tome on sex, love, and fertility, expressed their view in an Aug. 3 letter to administrators of the institute.

The scholars said that their work on the project was "a very fruitful and professional scientific collaboration which has highlighted to us the outstanding academic profile of your institute as well as the great scientific and editorial competence of the main curator of the Dizionario, Professor JosĂ© Noriega."

"It is therefore with great distress that we learned the news about the sudden dismissals of two full professors, JosĂ© Noriega and Livio Melina, together with other colleagues: Maria Luisa Di Pietro, Stanis' aw Grygiel, Monika Grygiel, Przemys' aw Kwiatkowski, and Vittorina Marini. All of them are scholars of outstanding international reputation and some of them have equally collaborated with us at the Dizionario," they wrote.

"We cannot see any convincing reason " academic, doctrinal or disciplinary " which justifies their dismissal."

"If your institute wants to maintain its high academic profile and international reputation, we ask you to revoke these dismissals and to reassume the aforementioned scholars among the faculty of your Institute," the scholars concluded.

The letter comes during a period of controversy at the institute.

Last month, new statutes were approved for the institute, in response to a 2017 announcement that Pope Francis would legally refound the Institute, and broaden its academic curriculum, from a focus on the theology of marriage and the family to an approach that will also include the study of the family from the perspective of the social sciences.

After the new statutes designed to implement that vision were approved, students, alumni, and faculty raised concerns about the role of faculty members in the institute's new governing structure, about the reduction of theology courses and the elimination of some theology disciplines, and about the dismissal of some faculty members, including Msgr. Livio Melina and Noriega.

Faculty members have told CNA they do not object to the pope's desire to expand the school's mission or approach, but say that the administrators responsible for implementing that mission have acted unfairly.

More than 250 students and alumni of Rome's John Paul II Institute have signed a letter expressing their concern about the school's new statutes, and the dismissal of Noriega and Melina. The letter expresses concern that current students will not be able to complete the academic programs in which they are currently enrolled, and the faculty dismissals have taken place without due process.

On July 31, Fr. Jose Granados, the Institute's vice-president, told CNA that "the identity of the Institute is seriously threatened," and called for administrators to resume discussion with faculty members about the approach to implementing Pope Francis' call for an expansion of the school's approach.

Earlier in July, the Institute's president, Msgr. Pierangelo Sequeri, told Vatican News that that although some students have raised concerns about the Institute's direction, others "have already written expressing confidence in the renewal and expansion of research and training in theological-pastoral and anthropological-cultural fields," at the Institute.

Sequeri lamented the controversy surrounding changes to the Institute's identity.

"The polemics, more or less malicious, that in this regard, try to involve the many students that look with trust to the project of a truly 'Catholic' knowledge and formation, obviously cultivate other interests. They are not the ones of John Paul II, not the ones of Pope Francis, not the ones of the Institute."

Among the signatories to the letter are John Crosby, a professor of philosophy at Franciscan University of Steubenville; Ignacio de Ribera-Martin, an assistant professor at the School of Philosophy of the Catholic University of America; and Tracey Rowland, the St John Paul II Research Chair in Theology at Australia's University of Notre Dame, Australia and member of the International Theological Commission.