Franciscan mission priest St. Junipero Serra would perhaps recognize some of the music that will be sung in an upcoming tour of the London Oratory Schola Cantorum Boys Choir in Utah and California, which will include three of the Spanish missions. 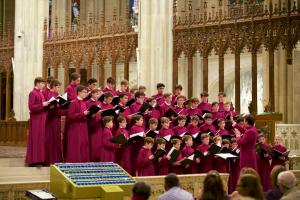 London, England, (CNA) - The schola, perhaps best known for its work featured in the soundtracks for the Harry Potter and Lord of the Rings films, chose the missions for their next tour because of the many invitations they have received to sing in the area. But most of all, they chose them because they will be singing music from their new album entitled "Sacred Treasures of Spain."

"The Spanish history behind the missions is of immense significance, and ties in with the repertoire which we are singing," Charles Cole, the director of the boy's choir, told CNA.

"Many pieces of Spanish renaissance music and indeed composers themselves crossed over to New Spain and have become part of an amazing and beautiful heritage which reaches into the chain of missions. So singing this music in those beautiful churches has a resonance and appeal which was too much to resist," Cole added.

The music of the album which will be sung on the tour will include music from Spanish Renaissance composers such as TomĂˇs Luis de Victoria and Francisco Guerrero, who were also priests, and Alonso Lobo, among others.

While the recording of the album itself took just three days, the music is well-known to the boys, because they have sung most of these songs during the liturgy, Cole said.

"In a sense the choir is always preparing for an album, because we return to these pieces over and over again in the context of the liturgy, and we try to refine and purify the performance singing over the long term," he said.

The schola was founded in 1996, and the boys, ranging in age from 7-18, are educated in the Junior House of the London Oratory School. They rehearse and sing multiple times throughout their school day.

The Spanish album is the second such album recorded by the choir. The first, "Sacred Treasures of England," was released in 2017.

Cole said there is a distinct difference between the English sacred music and the Spanish sacred music on the albums, even though both styles of music profess "profound truths" and are of "staggering quality."

In the English album, "the music sometimes points to the struggle in times of adversity, hinted at by (William) Byrd's inclusion of the text â€~have mercy on me' at the end of his Ave Verum Corpus," Cole said.

"On the other hand, Byrd's contemporaries in Spain, some of whom are presented on Sacred Treasures of Spain, were working unimpeded in the most fertile Catholic conditions imaginable: under the powerful patronage of Philip II, their music has a sense of freedom and purity allowing them to achieve an extraordinary level of quality in their polyphonic writing which is staggeringly crafted."

Some of the pieces on the album include Guerrero's "O Sacrum Convivium", "O Quam Gloriosum" by Victoria, and "Versa est in Luctum" by Lobo.

The boys choir has already toured Spain to perform these pieces, Cole said, and they are looking forward to bringing these works of sacred music to the U.S. missions.

"...these missions are so beautiful, but each one is unique and special in its own way. We are very excited to bring the choir there. It is wonderful to bring alive the sound world of these Spanish renaissance composers in so fitting a place as these missions...it will be a tour we will remember forever."

The album, Sacred Treasures of Spain, can be found on both Amazon and iTunes, with the proceeds of sales going to support the choir program.

The schola's 10-day tour of the Catholic missions on the West Coast of the U.S. begins on July 18. The tour begins with performances in Salt Lake City and continues in California, where they will be singing in Santa Paula, Santa Barbara, Carmel, and San Francisco.