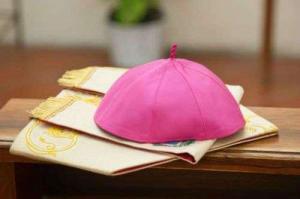 Vatican City, (CNA) - Lucia, 56, has served as judicial vicar of the diocesan tribunal of Ogdensburg, which is located in the north-eastern part of New York state, since 2017.

Bishop-elect Lucia will take over as head of Syracuse for Bishop Robert J. Cunningham, whose resignation was accepted Tuesday by Pope Francis after he turned 75 '" the ordinary age of retirement '" last June.

In May, Cunningham celebrated his 10th anniversary as bishop of Syracuse and 50th anniversary of his ordination to the priesthood with a Mass of Thanksgiving at the Cathedral of the Immaculate Conception.

In 2015, Cunningham came under criticism for comments he made during a 2011 deposition for a federal lawsuit filed by a man claiming to have been sexually abused by a Syracuse priest as a child.

According to local news site Syracuse.com, in the deposition, the bishop said the alleged victim was "culpable" in the situation, though later in the same deposition he retracted, saying he could not judge culpability without knowing the complete circumstances.

After the 2015 news report, Cunningham issued a public letter clarifying that he had "tried my best to answer questions and I must admit gave responses that I wish were different."

"Bottom line is I cannot go back and change my words but I can assure you that I did not believe the individual involved in the case was at fault," Cunningham wrote. "Victims of abuse are never at fault!"

The Diocese of Syracuse released a list of 57 priests credibly accused of abusing a minor, with some of the charges dating back to the 1950s, Dec. 1, 2018.

Stressing that no clergy credibly accused of abuse of a minor are in active ministry, Bishop Cunningham said the list includes both deceased priests and living priests removed from all ministry.

The Diocese of Syracuse serves over 237,000 Catholics in seven counties in central and south-central New York State.

Lucia was born March 17, 1963 in Plattsburgh, New York. After studying at Wadhamns Hall Seminary College and Christ the King Seminary in East Aurora, he was ordained a priest for the diocese of Ogdensburg, New York in 1989.

Lucia served as a parochial vicar in several parishes, including Saint Mary's Cathedral, over the next eight years. From 1997-1999 he studied for and received a license in canon law from the University of St. Thomas in Rome.

After returning to New York, Lucia administrated Saint Mary Parish in Canton, and served as adjutant secretary of the diocesan tribunal and part-time chaplain of Gouverneur Correctional Facility.

Over the years Lucia has also served as particular secretary to the bishop and vice-chancellor, adjutant judicial vicar, director of seminarians, and chancellor and episcopal vicar for Diocesan Services.

He has been pastor at six parishes in the Diocese of Ogdensburg, most recently Saint Mary Parish in Waddington and Saint John the Baptist in Madrid.

Lucia has been judicial vicar since 2017, and understands Spanish, Italian, and French, in addition to English.

The date of the bishop-elect's ordination and installation as the 11th bishop of Syracuse will be announced soon and will take place at the Cathedral of the Immaculate Conception in Syracuse.

Lucia and Cunningham will hold a joint press conference and celebrate Mass together June 4.