Humility should be the foundation of media work, pope tells journalists

Pope Francis told journalists Saturday that their profession has a great responsibility, the foundation of which should be humility. 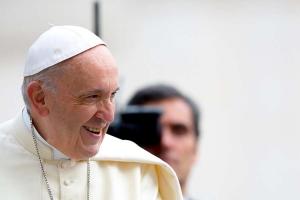 Vatican City, (CNA) - "Humility is an essential virtue for spiritual life; but I would say that it can also be a fundamental element of your profession," the pope said May 18.

He affirmed that there are other important qualities of a journalist, such as professionalism, writing skill, and ability to investigate and ask the right questions, but added that, "still, humility can be the cornerstone of your activity."

"Yours is an indispensable role, and this also gives you a great responsibility," he continued. "It asks of you a particular care for the words you use in your articles, for the images you transmit in your services, for everything you share on social media."

Pope Francis added that, "humble journalists does not mean mediocre, but rather aware that through an article, a tweet, a live television or radio program, you can do good, but also, if you are not careful and scrupulous, evil to others and sometimes to entire communities."

The pope spoke about humility in journalism during a meeting with around 400 members of the Association of Foreign Press in Italy, at the end of which he gave out copies of the book, "Comunicare il Bene," ("Communicate the good") which compiles some of his words to journalists over the last six years.

In his speech the pope acknowledged "how difficult and how much humility the search for truth requires," saying, "I therefore urge you to work according to truth and justice, so that communication is really a tool to build, not to destroy..."

He also gave advice on the importance of humility, showing in what ways it helps a journalist to do his or her job well. For example, he said it is humility which drives someone to look deeper than the first, easy solution to a question.

If a mistake is made, it should always be rectified, he advised, especially in a time when, through the internet, false information is easily spread. He also warned media professionals to resist the temptation to publish something which has been insufficiently verified.

Humility, he continued, also helps journalists to not be slaves to haste, but to take the necessary time to understand something well.

Another quality of a humble journalist is seeking to know all the facts before relating them or commenting on them, he said, and as St. Francis de Sales once said, to use words carefully, "as the surgeon uses the scalpel."

Pope Francis also urged those in media to work to bring to light the circumstances of those who have been rejected, excluded, and discriminated against.

"You and your work are needed to help not to forget many situations of suffering, which often do not have the light of the spotlight, or they have it for a moment and then return to the darkness of indifference," he said.

Thanking journalists for their work, which if done in service, "becomes a mission," the pope said they help people to not forget the lives "suffocated before they are even born" or those that, when born, suffer from hunger, hardship, war, persecution, or abuse.

He encouraged journalists to tell those stories, but to also tell the stories of people who sacrifice themselves, even heroically, to help others.

Pope Francis called these stories "a submerged ocean of good that deserves to be known and that gives strength to our hope."

He assured the journalists, many of whom are secular, of the Church's esteem for them, "even when you put your finger in the wound, and perhaps the wound is in the ecclesial community."

He also quoted Pope St. John Paul II in a meeting with the same association in 1988, when he said: "The Church is on your side. Be Christian or not, in the Church you will always find the right esteem for your work and the recognition of freedom of the press."