A Vatican court has decided not to initiate canonical charges against a former Vatican official, after an investigation into allegations he made sexual advances toward a woman in the confessional several years ago. 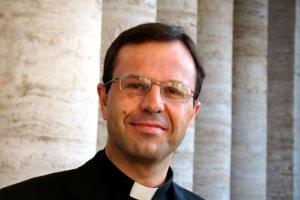 Geissler's community announced today that five judges of the Vatican's supreme tribunal decided May 15 that Geissler would not be tried for "a delict of solicitation to a sin against the sixth commandment in the context of confession."

A preliminary investigation into the matter, as specified by canon 1717 of the Code of Canon Law, was carried out by the Supreme Tribunal of the Apostolic Signatura.

Most likely to avoid the appearance of a conflict of interest, Pope Francis requested the Signatura undertake the process instead of the Congregation for the Doctrine of the Faith, which is the Vatican office usually charged with reviewing allegations of this kind.

Geissler, who maintained his innocence throughout the process, stepped down from his position within the CDF Jan. 29, where he had been an official since 1993. From 2009 he had been the head of the congregation's teaching office.

A statement released Jan. 29 said that Geissler "affirms that the accusation made against him is untrue, and asks that the canonical process already initiated continue. He also reserves the right for possible civil legal action."

Geissler, an Austrian, is also a prominent scholar of Bl. Cardinal Henry Newman.

The accusations against him became public at the end of September, when a (now-former) member of "Das Werk," Doris Wagner, claimed in a lengthy piece in the German newspaper DIE ZIET that she had been sexually harassed in the confessional by a member of the religious community she then belonged to, identified in the article as "Hermann G."

Wagner again spoke of the accusations last November, saying at a conference in Rome that she had received unwanted sexual advances and been "groomed" for sex by "a priest working to this day as capo ufficio at the Congregation for the Doctrine of Faith," according to La Croix International.

The solicitation of a sin against the sixth commandment within the context of confession is considered in the Church law to be a "grave delict," or offense, for which a priest can be dismissed from the clerical state.