Pope Francis celebrated the feast of his patron St. George '" Jorge in Spanish '" by giving away rosaries to 6,000 young people from Milan, asking them to pray for him through Mary's intercession. 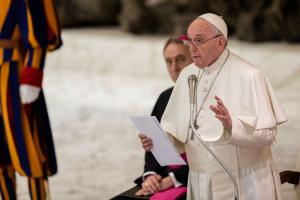 Vatican City, (CNA) - The rosaries came from World Youth Day in Panama and were given to the Milanese youth during a Mass celebrated by Archbishop Mario Delpini of Milan in St. Peter's Basilica Tuesday morning.

Papal spokesman Alessandro Gisotti said with this gesture Pope Francis "asked the young people to remember him in a special way in their prayer, particularly by entrusting him to the Virgin Mary."

The same group of young people will be present at the general audience April 24.

The feast of St. George is the "onomastico," or name day, of Pope Francis' baptismal name: Jorge Mario Bergoglio. The day, April 23, is an official holiday in the Vatican.

The 6,000 boys and girls who received rosaries are on pilgrimage in Rome. They are part of the Ambrosian rite, named for St. Ambrose, who led the diocese in the 4th century.

The Ambrosian rite is still celebrated throughout the Archdiocese of Milan.

For his name day in 2018, Pope Francis gave away around 3,000 gelatos to homeless served by Caritas soup kitchens and shelters around Rome.

During the Extraordinary Jubilee of Mercy in 2016, Francis marked St. George's feast day by hearing the confessions of 16 boys and girls in St. Peter's Square.