Pope Francis Thursday told the formerly warring leaders of South Sudan that peace is possible in their fledgling country through the power of Christ's resurrection. 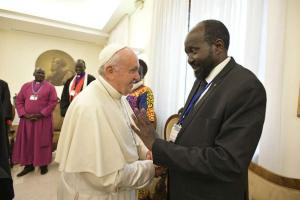 Vatican City, (CNA) - "Your people today are yearning for a better future, which can only come about through reconciliation and peace," he said at the conclusion of a "spiritual retreat" for the South Sudanese leaders in Vatican City April 11.

"We Christians believe and know that peace is possible, for Christ is risen. He has overcome evil with good. He has assured his disciples of the victory of peace over everything that fans the flames of war: pride, greed, the lust for power, self-interest, lies and hypocrisy," Francis said.

The Vatican retreat brought together the South Sudanese president Salva Kiir Mayardit and opposition leader Riek Machar following a five-year civil war that took the lives of hundreds of thousands of people.

Kiir and Machar signed a tenuous peace agreement in September 2018, which the country's Catholic bishops have called "fatally flawed" because it does not address the root causes of the conflict.

Pope Francis encouraged the South Sudanese leaders to "seek what unites you, beginning with the fact that you belong to one and the same people, and to overcome all that divides you."

He challenged the leaders to consider their responsibility before God to serve their people.

"Let us not forget that God has entrusted to us, as political and religious leaders, the task of being guides for his people. He has entrusted much to us, and for this reason will require from us much more! He will demand an account of our service and our administration, our efforts on behalf of peace and the well-being of the members of our communities, especially the marginalized and those most in need. In other words, He will ask us to render an account not only of our own lives, but the lives of others as well," the pope said.

"In a real way, all of us can say that we were called to the life of faith and were chosen by God, but also by our people, to serve them faithfully. In this service, we may well have made mistakes, some rather small, others much greater. Yet the Lord Jesus always forgives the errors of those who repent. He always renews his trust, while demanding '" of us especially '" total dedication to the cause of his people," he added.

The pope said that he is praying for the leaders for South Sudan to become peacemakers, who "build peace through dialogue, negotiation and forgiveness."

"We have clearly heard the cry of the poor and the needy; it rises up to heaven, to the very heart of God our Father, who desires to grant them justice and peace," he said.

The pope commented on the uniqueness of the "spiritual retreat" co-hosted by the Secretariat of State and the offfice of Justin Welby, the Anglican Archbishop of Canterbury.

"We are all aware that this meeting is something altogether special and in some sense unique, since it is neither an ordinary bilateral or diplomatic meeting between the Pope and Heads of State, nor an ecumenical initiative involving representatives of different Christian communities," Pope Francis said.

"The purpose of this retreat is for us to stand together before God and to discern his will," he continued. "It is to reflect on our own lives and the common mission the Lord has entrusted to us, to recognize our enormous shared responsibility for the present and future of the people of South Sudan, and to commit ourselves, reinvigorated and reconciled, to the building up of your nation."

Francis expressed his "spiritual closeness" with the all of the South Sudanese people, particularly refugees and the sick.

South Sudan's civil war has left 2.1 million people internally displaced, with another 2.5 million refugees, according to the United Nations.

"May the Merciful God touch the heart of every man and every woman in South Sudan, fill them with his grace and blessings, and bring forth rich fruits of lasting peace, even as the waters of the Nile, flowing through your country, bring life and abundant growth," Pope Francis said.

Pope Francis confirmed his "desire and hope" to visit South Sudan soon, adding that this future visit would be together with Welby and and the former Moderator of the General Assembly of the Church of Scotland.

A prior trip to the war torn country with Welby was cancelled in 2017 due to security concerns.

"Upon all the Christians of South Sudan who, in helping those in greatest need, bind up the wounds of Jesus' body, I implore God's abundant graces and assure them of a constant remembrance in my prayers," Pope Francis said.

"Peace is the fundamental condition for ensuring the rights of each individual and the integral development of an entire people. Jesus Christ, whom God the Father sent into the world as the Prince of Peace, gave us the model to follow," he said.

"Peace is the first gift that the Lord brought us, and the first commitment that leaders of nations must pursue."