Belgian Cardinal Godfried Danneels dies at the age of 85

Cardinal Godfried Danneels died Thursday at the age of 85 in his native Belgium. Danneels served as Archbishop of Mechelen-Brussels and leader of the Belgian Bishops' Conference for more than thirty years. 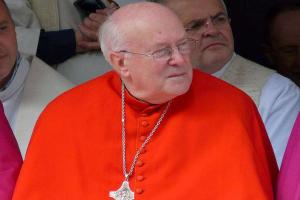 Vatican City, (CNA) - In later life, Danneels was widely recognized as an influential member of the college of cardinals and an at times controversial figure.

"This zealous pastor served the Church with dedication not only in his diocese but also at the national level as President of the Conference of Bishops of Belgium, while being a member of various Roman Dicasteries," Pope Francis wrote March 14 in a telegram to the bishops of Belgium expressing his condolences.

"Attentive to the challenges of the contemporary Church, Cardinal Danneels took an active part in various Synods of Bishops, including those of 2014 and 2015 on the family. He has just been reminded of God at this time of purification and of walking toward the Resurrection of the Lord," Francis said.

Considered among the more progressive churchmen of his generation, Danneels was an enthusiastic supporter of the liturgical reforms which followed Vatican Council II. He was also a prominent advocate for decentralized Church governance and interreligious dialogue.

As leader of the Church in Belgium, the cardinal was an established figure in national life, keeping close company with politicians and members of the royal family. He was sometimes criticized for his apparent willingness to embrace secular-liberal politics, once controversially describing same-sex marriage as a "positive development" in Belgium.

In recent years, accusations of mismanagement and cover-up of clerical sexual abuse cast a shadow over his past leadership of the church in Belgium.

Danneels was at the center of a national scandal when the Belgian newspapers De Standaard and Het Nieuwsblad published transcripts of a recording in which he appeared to pressure a victim of sexual abuse to remain silent.

The victim had been abused by his uncle, Belgian Bishop Roger Vangheluwe, beginning at the age of 5. When the victim met with Danneels to report the abuse and insist on his uncleďż˝ s removal from office, the cardinal told the man that Vangheluwe would retire in a few months.

"I donďż˝ t think youďż˝ d do yourself or [your uncle] a favor by shouting this from the rooftops," Danneels was recorded saying.

The cardinal denied that he intended any cover-up.

Danneels was born June 4, 1933 in Kanegem, diocese of Bruges, and grew up in a family of six in Eastern Flanders.

Ordained in 1957, Danneels went on to teach theology at the Flemish Catholic University of Louvain as a professor for ten years, after earning a doctorate at the Pontifical Gregorian University of Rome.

Danneels was appointed as the bishop of Antwerp by Pope Paul VI in 1977, became archbishop of Mechelen-Brussels in 1980, and created cardinal by Pope John Paul II three years later.

After his retirement in 2010, Danneels would infrequently speak in public.

In 2013, Danneels stood next to the newly elected Pope Francis on the loggia of St. Peter's Basilica. Pope Francis later invited Danneels to attend the two sessions of the Synod of Bishops on the family as a special delegate.

In a 2015 authorized biography of the cardinal, Danneels was listed as being part of a group of cardinals who coordinated efforts ahead of the conclave that elected Pope Francis.

The funeral for Cardinal Danneels will take place in the Cathedral of St. Rombouts in Mechelen, and will be celebrated by the current Archbishop of Mechelen-Brussels Cardinal Jozef De Kesel.

In a March 14 statement announcing the death, Cardinal Kesel recognized Danneels' years of service, "We are very grateful to Cardinal Danneels. For many years he has exercised shepherding in the Church in a period of fundamental changes in Church and society."

"He has experienced trials, and in the end he was greatly weakened and exhausted. We continue to thank him gratefully. May he rest in God's peace," he said.