Letter from the Devil translated - written by possessed nun. Here's what it says

A supposed letter from the devil has been partially translated, more than 300 years after it was written. 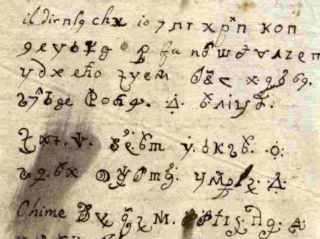 The cryptic letter was allegedly authored by the devil.

LOS ANGELES, CA (California Network) -- A letter written by a nun who was said to be possessed by the devil more than 300 years ago, has been partially decoded.

Sister Maria Crocifissa della Concezione wrote --or found the letter in 1676 while she was possessed by the devil, according to contemporary accounts. The letter features strange writing, mostly symbols. She said she awoke to find the letter and could not say who wrote it.

Sister Maria lived in a convent in Sicily, and had lived in the convent since age 15.

The bizarre characters of the letter were deciphered using software found on the dark web.  Scholars figured out what alphabets Sister Maria likely knew and decided on Latin, Greek, and Arabic and Runic. They entered these alphabets into a code breaking software program available on the dark web, and they let the program work its magic.

The program recognized several of the characters and enabled researchers to decode the mysterious writing. Not all of the letter could be translated, but enough was deciphered to get the meaning of it.

The letter claims that humans invented God and Jesus and later describes them as "dead weights." The letter also criticizes God and says, "God thinks He can free mortals... The system works for no one... Perhaps now, Styx is certain." Styx is the river in Greek mythology which separates the netherworld from the world of the living.

Sister Maria was known to scream and faint at the altar. She frequently warned others that the devil was trying to get her to serve evil rather than God.

It is unclear if she deliberately wrote the letter as a hoax, or if she wrote it while possessed.

Scholars are now working to translate the whole of the letter.