A member of Pope Francis' commission to protect minors says a new report on the abuse of more than 500 choir boys in Germany points to a current reality in many non-western countries --and that bringing these things to light means progress for everyone. 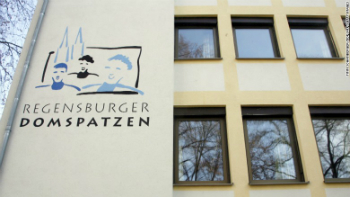 The report found that over 500 boys had been subjected to abuse, mostly corporal punishment, between 1945 and 1994.

Rome, Italy, (CNA/EWTN News) - "It will take time, but this kind of sensitivity that is created by publicly discussing these things of course will push, because people realize what is right and what is wrong, and they realize that they will be questioned if something goes wrong," Fr. Hans Zollner SJ told CNA July 19.

He spoke following the July 18 publication of a report on an investigation German lawyer Ulrich Weber carried out on the Regensburger Domspatzen, the official choir for the Regensburg Cathedral.

While it was previously thought that only 250 children had been victimized, Weber said the number of children affected is closer to around 500.

According to the report, members of the choir were exposed to physical abuse and 67 suffered sexual abuse from 49 members of the school's faculty, ranging from 1945 until the early 90s. However, most of alleged perpetrators will likely not face charges due to the amount of time that has gone by.

The reported violence ranged from public ridicule, heavy beatings, and sexual abuse, but a significant portion of the documented incidents involved slapping and food deprivation, a legal form of discipline in Bavaria until the 1980s.

Fr. Zollner said the magnitude of the abuse was discovered thanks to the decision of the diocese's bishop to open the archives, allowing a more in-depth investigation to take place.

"This includes of course the Church leadership, but this also includes the parents and relatives of the children," he said, noting that he himself grew up in the city and had friends who were members of the choir.

Zollner recalled that his friends had talked about getting "beaten up," but that at the time, "sensitivity to child rights and the violation of these rights was not as high as it is now, and corporal punishment was considered more or less a normal way of education."

The majority of the excessive discipline in the choir was attributed to Johann Meier, a schoolmaster at one of the boarding schools from 1953 to 1992. However, Benedict XVI's older brother, Georg Ratzinger, who directed the choir from 1964-1994, was accused of turning a blind eye to the abuse.

It also accused Cardinal Gerhard Muller, who oversaw the diocese from 2002-2012, of cover-up.

Fr. Ratzinger said he was unaware of any sexual abuse, but admitted to slapping children, as it was common practice at the time.

In his comments to CNA, Fr. Zollner noted that while societal understanding of abuse has changed in most western countries, there are several in Asia, Africa and some parts of Latin America where such actions are still common practice.

Speaking of a recent visit to Myanmar, where he offered training and workshops on child protection guidelines, the priest said that while there, he was told that parents would often "specifically ask the teachers to beat their children if they do not obey."

Zollner said that in Myanmar specifically, it is still normal in some Buddhist monasteries to flog the monks publicly if they are disobedient.

However, the government is now "clamping down on that, so they are also changing the law so that in public schools corporal punishment is prohibited."

In western society the use of corporal punishment is widely recognized as unacceptable, and this is thanks to both a growing awareness and a "owning up" to the consequences of what is now considered as abuse.

The adoption of the Declaration on the Rights of the Child by the U.N. in 1959 and the subsequent formation of the U.N. Committee for the Rights of the Child have both prompted an increase in awareness that "a young person needs formation and education, yes, and also needs limits, but this can never be imposed and should never be imposed by physical violence or psychological violence or humiliation," Zollner said.

But to make the point across the board, these rights must be explained and repeated, he said. We must also be realistic with the fact that while many, if not all, countries have signed the declaration, "not all have ratified them."

When it comes to taking punitive action against those who were abusive in the past, believing it to be acceptable as the normal custom of the time, Fr. Zollner said holding them to account for their actions is a tricky question.

In most cases there is a statute of limitations, and "you can only hold people accountable for the time period that the law covers and for all those criminal acts that are punishable."

"We don't have general measures that would and could punish people for something that has happened decades ago if there is not a legal provision for that," Zollner said.

A current trend for western charities funding Church or social work is to have the recipient sign up not only to obey the law in their country, but they are also required to sign a child protection/safeguarding policy that the charity maintains.

"People unfortunately are not just doing good things because they want to do it, but sometimes they also need to be forced to do it by such measures that are taken in case you do not follow the norms," he said.

When it comes to the Church and her role in protecting children from predators, Fr. Zollner said the first thing to do is to learn from the mistakes of the past, particularly bishops and Church leaders as a whole.

This, he said, "gives us the possibility to do at least a little bit of justice to all those who have been harmed in such a terrible way."

Practical steps include thorough screenings of employees on the part of Church institutions that carry our educational, social or pastoral work, delving into the person's past and present, and looking specifically at their interactions with youth.

It's also necessary that "very clear guidelines and norms" are given, as well as initial and ongoing training for Church workers, which is a task the commission is specifically responsible for.

Material from EWTN News Nightly was used in this report.