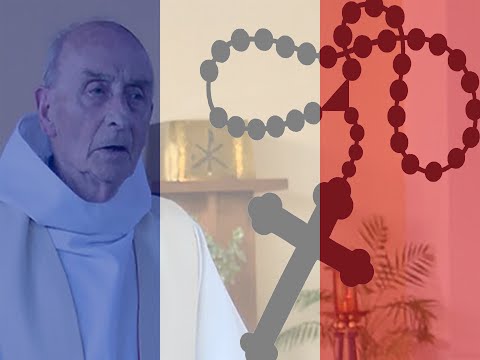 LOS ANGELES, CA (Catholic Online) - The service was held inside the 11th Century Gothic cathedral in Rouen, according to the Daily Mail. Policemen and undercover officers surrounded the crowds around the Cathedral, as police sources explained security would be "at the highest possible level, because of the ongoing fear of attack."

The service included a long procession of clergy, bishops, and archbishops, followed by the pallbearers carrying Father Hamel's coffin through the Door of Mercy and placing it before the altar.

"He would often ask himself why me? Today, Jacques, our brother, your brother, you have your answer: Our God of love and misery chose you to be at the service of others," expressed heartbroken Roselyne Hamel, Father Hamel's sister.

More than 2,000 people gathered to pay their respect to the 85-year-old priest. Inside the cathedral, a section of pews was designated solely for residents of Saint-Etienne-du-Rouvray. A giant television screen was set up outside the cathedral to broadcast the service to those that didn't fit inside.

Although this terrifying attack has sparked fear of Muslims within France's religious communities, many churches opened their doors to Muslims as a tribute to Father Hamel and a stand against radical Islam.

France is resting in a time where fear is imminent, and the danger is real. With terrorist attacks falling so close together and many innocent lives lost, it is now more important than ever before to stand united as one and pray for peace.

One thing Father Hamel's unfortunate death has shown us is ... in times of horror, we stand together.

We cannot succumb to the evil; Satan will not win.