It has emerged that a second nun of the Missionaries of Jesus has accused Bishop Franco Mulakkal of Jullundur of sexual harassment. The bishop has been charged with raping a nun repeatedly over the course of two years, allegations he denies. 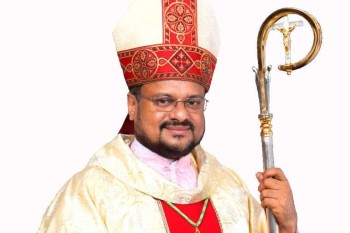 Kottayam, India, (CNA) - It has emerged that a second nun of the Missionaries of Jesus has accused Bishop Franco Mulakkal of Jullundur of sexual harassment. The bishop has been charged with raping a nun repeatedly over the course of two years, allegations he denies.

The first nun, who is a member of the Missionaries of Jesus, has said that Bishop Mulakkal, 55, raped her during his May 2014 visit to her convent in Kuravilangad, in Kerala. In a 72-page complaint to police, filed in June 2018, she alleged that the bishop sexually abused her more than a dozen times over two years.

The Missionaries of Jesus is based in the Diocese of Jullundur, and Bishop Mulakkal is its patron.

Bishop Mulakkal was arrested in September 2018 amid protests calling for a police investigation of the allegation. He was subsequently released on bail, and he has maintained his innocence.

According to The New Indian Express, a witness in the case against the bishop told investigators Sept. 9, 2018 that from 2015 to 2017 she participated in sexual video chats with the bishop, having been pressured by him, and that he groped and kissed her April 30, 2017, at a convent in Kannur.

This second alleged victim did not wish to press charges, but there are calls for police in Kerala to bring a suo motu case against Bishop Mulakkal.

A preliminary hearing was held in Bishop Mulakkal's case Feb. 22, where his lawyers asked that the charges be dismissed. The defense said that the leak of witness statements to the media demonstrated a collusion between prosecutors and the press, and that the bishop could not have a fair trial. The bishop's counsel have also argued that his accuser bears a grudge against him.

The Times of India reported that the court adjourned the case to Feb. 29.

The nun who initially accused Bishop Mulakkal of rape has complained against him to the Kerala women's commission, saying he his harrassing her and others through social media videos.

In August 2019 a nun representing the alleged victim accused the defense of evidence tampering in the case and demanded that the real evidence be presented.

The bishop has claimed the allegations were made in retaliation against him because he has acted against the nun's sexual misconduct. He said the nun was alleged to be having an affair with her cousin's husband.

The bishop was charged in April 2019 with rape, unnatural sex, wrongful confinement, and criminal intimidation. He faces imprisonment of 10 years to life if found guilty.

He was temporarily removed from the administration of his diocese shortly before his arrest.