Catholics in Hong Kong are continuing to participate in large-scale protests on the island territory, which have been going on now for over 100 days. 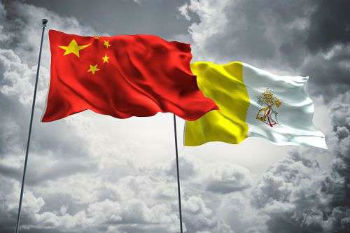 Hong Kong, China, (CNA) - Catholics in Hong Kong are continuing to participate in large-scale protests on the island territory, which have been going on now for over 100 days.

Despite the protests' importance to people of faith, two Catholic leaders in the movement - the island's auxiliary bishop and a student leader - told CNA that they do not expect the Vatican to weigh in on the situation in Hong Kong.

"It doesn't seem to me that it's necessary for the Holy See to get involved in the protests of Hong Kong. On the other hand, I have not spoken with anyone from the Holy See regarding the movement," Bishop Joseph Ha Chi-shing told CNA Sept. 19.

Bishop Ha has been publicly supportive of the protests, as has Hong Kong's bishop emeritus, Cardinal Joseph Zen. Ha has taken part in ecumenical prayer rallies with protesters in the past, urged an increase in prayer and said he is concerned for the safety of the many young people involved in the protests.

A controversial extradition bill, now officially withdrawn, sparked the first large protest on the island in June, when an estimated 1 million marchers took to the streets, chanting and singing.

The bill would have allowed alleged criminals in Hong Kong to be extradited to mainland China, leading to fears from Catholics and Christians that the Communist Chinese would use the bill to exert pressure on the free exercise of religion in Hong Kong.

Edwin Chow, acting president of the Hong Kong Federation of Catholic Students, told CNA that he thinks the Vatican's delicate relationship with the Chinese government will make it unlikely that Pope Francis will come out in support of the protesters.

"I don't really think that the Vatican will say something on the protests in Hong Kong. I hope they will support, but I don't think that they will," Chow told CNA.

Sept. 22 marks one year since the Vatican signed a deal with the Chinese government on the appointment of bishops, the details of which have still not been made public.

Beijing has for years sought to control religion in China, leading to widespread persecution. The U.S. Commission on International Religion wrote in its 2018 report that last year China "advanced its so-called 'sinicization' of religion, a far-reaching strategy to control, govern, and manipulate all aspects of faith into a socialist mold infused with 'Chinese characteristics.'" Christians, Muslims, Tibetan Buddhists, and Falun Gong practitioners have all been affected.

Cardinal Zen, in particular, is a sharp critic of the Vatican-China deal, and has called the deal a step towards the "annihilation" of the Catholic Church in China.

He said a new protest anthem called "Glory to Hong Kong," which has recently spread virally online, has even made its way into the Masses that the federation have held.

"People in Hong Kong really like this song, and it's become a new anthem of the whole protest," he said.

He said a local parish started the practice of singing the anthem at the end of Mass last week, but this week the diocese published a set of guidelines warning against the singing of political anthems at Mass.

"Although the parish is sure that the Lord's ceremonies and the devotees are deeply concerned about the current turmoil in Hong Kong society, they do not agree that the social movement songs are applicable to the sacrificial ceremonies," the diocese Secretary General wrote Sept. 19.

Last weekend, he said, there was a large protest in the city center, which Chow attended. He said like at many of the previous protests, the police used tear gas and water cannon to break up the protesters.

One of the protesters' demands is a full investigation into what they see as brutal tactics by the police throughout the protests.

"I think the police are trying to suppress the protests, so sometimes they don't actually approve the protest, but [people] still go outside. But actually for the protests that are not allowed by the police, some people may be afraid that they will be arrested, and will not go out. So I would say that actually the people trying to protest are decreasing."

The protests are becoming more and more aggressive with more and more use of force, he said. Many protest activities, at least one almost every day, are scheduled for the coming two weeks, he said.