Six suspected members of a radical Hindu group were arrested in India this week after dozens of Catholics were attacked on a Marian pilgrimage. 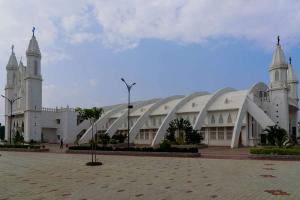 Velankanni, India, (CNA) - On Sunday, 40 Catholics were physically or verbally assaulted while on a 280-mile pilgrimage from Karnataka to Velankanni, a coastal town in south east India, ucanews reported.

The assailants blocked the road and destroyed the pilgrims' Marian statue. No one was seriously injured in the attack.

A police official said six men have been arrested in connection with the assault. They are being charged with rioting, attempted murder, and disturbing religious peace. A local Catholic told ucanews that the attackers claimed to be affiliated with the radical Hindu Munnani group.

The century-old pilgrimage ends at the Basilica of Our Lady of Good Health. Beginning on Aug. 31, the shrine hosts nine days of festivities, leading up to the feast of the Nativity of the Blessed Virgin Mary on Sept. 8.

During the trek, a Marian statue is typically pulled in a decorated cart while pilgrims sing hymns or pray the Rosary. Pilgrims stay overnight at parishes along the way to Velankanni.

Father L. Sahayaraj, deputy secretary of the Tamil Nadu Bishops' Council, told ucanews the pilgrimage had not seen similar disturbances in the past. He warned that such attacks will sow hatred and division.

Since the pro-Hindu Bharatiya Janata Party took power in 2014, Church leaders have said that India's Christians have faced an increase in persecution from radical Hindu groups.

Father Cyril Joseph, director of communications for the Archdiocese of Bangalore, called the attacks a threat to the constitution's protections of free expression and free movement in the country.

"Such attacks are a serious threat to peace and harmony, especially between people of different religious groups," he said, according to ucanews. "Though the attack was on a small group, the message is for all Christians. It was an open threat against public expression and practice of our faith."