China continues to rebut Western claims about repression of Uighurs

An article published Wednesday in a state-run paper from mainland China repeated government talking points regarding the situations of the Uighurs, a Muslim ethnoreligious group in the country's northwest. 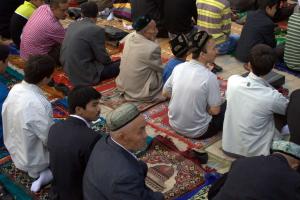 Beijing, China, (CNA) - Some 1 million Uighurs have been detained in re-education camps for Muslims in China's Xinjiang Uyghur Autonomous Region. Inside the camps they are reportedly subjected to forced labor, torture, and political indoctrination. Outside the camps, Uyghurs are monitored by pervasive police forces and facial recognition technology.

In August 2014 officials in Karamay, a city of Xinjiang, banned "youths with long beards" and anyone wearing headscarves, veils, burqas, or clothes with the crescent moon and star symbol from using public transit. That May, universities across the region banned fasting during Ramadan.

The Chinese government has said reports on the camps by Western governments and media are unfounded, claiming they are vocational training centers and that it is combatting extremism.

Li Yang, an author at China Daily, an English language daily owned by the Communist Party of China, wrote July 24 that "Western critics of China's policies on human rights and religious freedom in the Xinjiang Uygur autonomous region seem to be divorced from the realities of the situation."

Li's piece focused on "Uygur separatists" who try "to brainwash the other Uygurs with extremism and terrorism."

He said that "all the measures that Beijing has taken to fight separatism, extremism and terrorism in Xinjiang are part of the global anti-terrorism campaign, as well as an integral part of China's efforts to boost local development."

Li noted that the Chinese government has set up "vocational educational centers" in Xinjiang, as well as "installing surveillance systems and deploying security forces."

He also pointed out that 150 million tourists visited Xinjiang last year, and that the autonomous region's economy has risen 40 percent over the past five years.

According to Li, "the religious freedom of all ethnic groups ... is strictly protected by law."

Li focused on the diversity of Xinjiang, saying that separatists ignore the interest of the region's other ethnic groups. Uighurs make up about 46% of the region's population; Han Chinese 39%, Kazakhs 7%, and Huis 5%. A large number of minorities make up the remaining 3%.

Attention was drawn to the human and religious rights situation in Xinjiang at the recent Ministerial to Advance Religious Freedom held by the US State Department last week.

US Secretary of State Mike Pompeo said July 18 at the gathering that survivors of the detention camps have described "a deliberate attempt by Beijing to strangle Uighur culture and stamp out" Islam.

In response, Chinese officials have been outspoken in defense of policies in the region.

A letter signed by Chinese scholars and religious officials posted July 19 by the Xinjiang government said Pompeo should "stop fabricating lies and slander about Xinjiang."

An editorial published in the People's Daily July 20 claims that China actually respects religious rights, and said that the United States has an "ulterior motive" to criticize China's treatment of religious minorities.

"They even use so-called freedom of religious belief as an excuse to undermine China's national harmony and interfere in China's internal affairs," the editorial said.

And the Chinese State Council Information Office released a white paper July 21 that claimed, among other things, that Xinjiang is a region where religious freedom is respected, and that the Uighur population did not choose to become Muslim.

In June, Rep. Chris Smith (R-NJ) told a congressional hearing that China's campaign to "sinicize" religion is proceeding with brutal efficiency. "Under 'sinicization,' all religions and believers must comport with and aggressively promote communist ideology -- or else," Smith said.

"It's never been worse than it is right now."

"Religious believers of every persuasion are harassed, arrested, jailed, or tortured. Only the compliant are left relatively unscathed. Bibles are burned, churches are destroyed, crosses set ablaze atop church steeples," Smith said.