Following terrorist attacks and ongoing threats to safety, Masses will be suspended in the Archdiocese of Colombo for a second week, Catholic leaders have said. 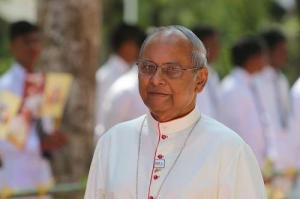 Colombo, Sri Lanka, (CNA) - Fr. Edmund Tillakaratne, a spokesperson for the archdiocese, told journalists Thursday that Cardinal Malcolm Ranjith had decided to suspend weekend Masses for a second weekend, according to the AP.

Two weekends ago, on Easter Sunday, bombs detonated at two Catholic churches, an evangelical church, three hotels, and a private residence, killing at least 257 people and injuring at least 500 others. Of the injured, 47 are still hospitalized for their injuries, the AP reported.

Last weekend, Cardinal Ranjith celebrated a televised Mass at his residence in lieu of the cancelled public Masses. A funeral service was held April 23 for many of the victims of the attacks.

The Islamic State has claimed responsibility for the attacks, and Sri Lankan officials believe that nine suicide bombers were involved in the attacks, according to the AP. Multiple arrests have also been made as officials search for additional suspects connected to the attacks, but officials have warned that some suspects are still at large.

Even though Sri Lankaďż˝ s 26-year civil war ended in 2009, the island nation has suffered periodic bouts of violence ever since. Sri Lanka is a majority-Buddhist country; the small minority of Christians in the country (fewer that 8%) are mostly Catholics. Roughly 10% of the population are Muslims.

Cardinal Ranjith criticized the government for "absolutely unacceptable" behavior, in ignoring intelligence that may have led to the prevention of the attacks. The country's chief of police and defense minister have both resigned following criticisms of mishandling intelligence related to the attacks.

Sri Lankan officials have taken several safety precautions in the wake of the attacks, including banning face veils, and banning the Islamist group National Thowheeth Jama'ath which was reportedly behind the attacks.

Ranjith has also warned that failure to provide sufficient security in the aftermath of the attacks may lead to more violence.

In his April 28 sermon Ranjith reflected on the mercy of God: "The finest expression of God's love is God's mercy. Therefore we must love and respect each other," he said.

He also prayed for a greater respect for human life, and for the victims of the Easter attacks.

"We feel truly sorry for all the families that have lost their loved ones and their dear ones. And I ask you dear brothers and sisters, please pray for them. They were the treasure of our lives, of our faith, of our existence. We pray for them; Lord receive them into your care and your love."

"We will help all those who are left destitute," he added. "Let's think of this today as we commemorate one week of (the loss of these people). I ask you please do something good today to another person, and (offer it) for the wellbeing of these people. May the Good Lord bless and keep each and everyone of them always in his love."