Police in Sri Lanka have detonated a suspicious package near St. Anthony's church in Colombo on Easter Monday. 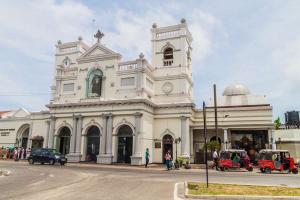 Colombo, Sri Lanka, (CNA) - Local media reported scenes of panic and confusion April 22, as crowds fled the area after what has been described as a "small explosion." Local police later confirmed the blast was the controlled destruction of a suspect item found in a nearby van.

The controlled detonation was carried out but local authorities at approximately 3:30pm local time Monday afternoon. It took place in the immediate area of St. Anthony's Catholic church and national shrine, which was at the center of the Easter Sunday terrorist attacks.

'" michael safi (@safimichael) April 22, 2019The controlled explosion follows the defusing of what the Times of London called a "large pipe bomb" near Colombo airport overnight, and authorities remain on high alert over the possibility of further attacks.

According to some reports, as many as 24 arrests have been made, and investigations are ongoing.

The Easter attacks, which have claimed more than 290 lives and injured a further 500, targeted several churches including St. Anthony's, as well as three hotels, a zoo, and a private residence.

World leaders have offered statements of condolence and solidarity to the island nation as government officials have appealed for unity in the face of the terrorist action.

Details of the attacks have continued to emerge, with police confirming that several of the explosions were the result of suicide bombers.

While no group has yet claimed responsibility for the coordinated series of attacks, Sri Lankan prime minister Ranil Wickremesinghe indicated on Monday that local intelligence and security services had been circulating warnings of an impending attack on churches 10 days before Easter.

Wickremesinghe said this information was not shared with him or his cabinet, and that he was investigating why additional precautions did not appear to have been taken. The prime minister also said that the immediate priority was to arrest those responsible.

While the prime minister confirmed that "so far the names that have come up [as suspects] are local", cabinet spokesman Rajitha Senaratne said on Monday that the government was considering the role of overseas terrorist groups.

"We do not believe these attacks were carried out by a group of people who were confined to this country. There was an international network without which these attacks could not have succeeded," Senaratne said.

Concerns have previously been raised in Sri Lanka about a potential spike in terrorist violence following the return of Islamist radicals to the country in the aftermath of the collapse of Islamic State.

As security services and police continue their investigations, Pope Francis renewed his prayers for the victims and appealed for international support.

Speaking from the balcony of the Apostolic Palace on Monday, the pope condemned the "inhuman" terrorist attacks shortly before leading the Regina Coeli prayers.

"I pray for the many victims and wounded, and I ask everyone not to hesitate to offer this dear nation all the help that is necessary," the pope said.

I also hope that everyone condemns these acts of terrorism, inhuman acts, never justifiable."