Free World Class Education
FREE Catholic Classes
'The grandparents who went before, the elderly who had dreams and hopes for us, and made great sacrifices for us, ask us an essential question: what kind of a society do you want to build?'

Preaching at a Mass celebrated in Canada's largest stadium, Pope Francis reflected on the elderly, who he said should be honored, and who serve as an example to the Church on how to pass on faith in a loving way. 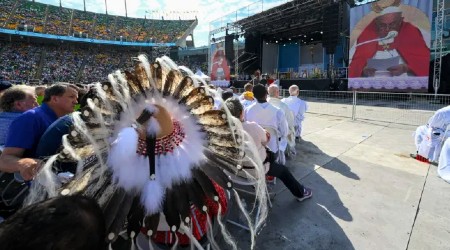 "In addition to being children of a history that needs to be preserved, we are authors of a history yet to be written," the Holy Father said.

"The grandparents who went before, the elderly who had dreams and hopes for us, and made great sacrifices for us, ask us an essential question: what kind of a society do you want to build?"

Developing a theme he introduced Monday in his speech at Sacred Heart parish, the pope reflected on the importance of presenting the faith to others in a loving way, rather than with proselytism.

"From our grandparents we learned that love is never forced; it never deprives others of their interior freedom. That is the way Joachim and Anne loved Mary; and that is how Mary loved Jesus, with a love that never smothered him or held him back, but accompanied him in embracing the mission for which he had come into the world," Pope Francis said.

"It was in our grandparents' homes that many of us breathed in the fragrance of the Gospel, the strength of a faith which makes us feel at home. Thanks to them, we discovered that kind of â€~familiar' faith. Because that is how faith is fundamentally passed on, at home, through affection and encouragement, care and closeness... Let us try to learn this, as individuals and as a Church. May we learn never to pressure the consciences of others, never to restrict the freedom of those around us."

The Mass marks the second day of Pope Francis' public activities during his weeklong trip to Canada. Yesterday, July 25, the pope publicly apologized for the Catholic Church's role in running much of Canada's government-sponsored residential school system. And speaking to a group of Catholics at Sacred Heart parish in Edmonton later that day, Francis reiterated his "shame" and sorrow at the hurt caused by Catholics during the era of Canada's residential school system. He praised the parish community as "a house for all, open and inclusive, just as the Church should be."

Commonwealth Stadium, home to the Edmonton Elks football team, is the largest outdoor arena in Canada. Local authorities estimated a crowd of 50,000 people at the July 26 Mass.

Pope Francis preached on the importance of recognizing the sacrifices that previous generations have made and of "safeguarding the treasure" of the faith that they have passed down.

"May Joachim and Anne intercede for us. May they help us to cherish the history that gave us life, and, for our part, to build a life-giving history," the pope concluded.

"May they remind us of our spiritual duty to honor our grandparents and our elders, to treasure their presence among us in order to create a better future. A future in which the elderly are not cast aside because, from a "practical" standpoint, they are "no longer useful." A future that does not judge the value of people simply by what they can produce. A future that is not indifferent to the need of the aged to be cared for and listened to. A future in which the history of violence and marginalization suffered by our indigenous brothers and sisters is never repeated. That future is possible if, with God's help, we do not sever the bond that joins us with those who have gone before us, and if we foster dialogue with those who will come after us."

Later today, July 26, Pope Francis will participate in a pilgrimage to Lac Ste. Anne, a site which plays host annually to thousands of pilgrims, billing itself as the largest annual Catholic gathering in western Canada. The pope will also celebrate a Liturgy of the Word at the site.