More than two dozen pro-life leaders are calling on the Trump administration to oppose the reelection of Luis Almagro, secretary general of the Organization of American States (OAS), due to his history of abortion advocacy. 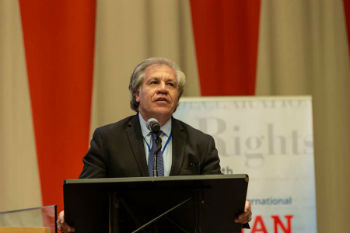 Luis Almagro Secretary General of the Organization of American States

Washington D.C., (CNA) - More than two dozen pro-life leaders are calling on the Trump administration to oppose the reelection of Luis Almagro, secretary general of the Organization of American States (OAS), due to his history of abortion advocacy.

The leaders called Almagro's activism "gravely inappropriate" in his capacity as OAS secretary general, noting that he has not been authorized by member states to advocate for abortion in the role.

"His irresponsible behavior puts at risk the legitimacy and authority of the OAS at a time when we need it to be strong and credible to effectively denounce the egregious violations of human rights in Cuba, Nicaragua and Venezuela," read a letter to U.S. Secretary of State Michael Pompeo.

The letter, dated Oct. 3, was signed by a coalition of pro-life leaders, including Marjorie Dannenfelser, president of Susan B. Anthony List; Catherine Glenn Foster, president of Americans United for Life; and Alfonso Aguilar, president of the Latino Partnership for Conservative Principles.

The group applauded Pompeo's pro-life efforts, which include announcing a $210,000 reduction in U.S. funding of the OAS earlier this year, due to the organization's advocacy for abortion.

"The institutions of the OAS should be focused on addressing crises in Cuba, Nicaragua and Venezuela, not advancing the pro-abortion cause," Pompeo said at the time, according to the Washington Post.

Almagro, who has held the post of OAS secretary general since 2015, is currently up for reelection. The pro-life leaders called on the U.S. to revoke support for him.

"[A]lthough Mr. Almagro has shown a willingness to confront the tyrannical regime of Nicolas Maduro, he is delegitimizing the institution of the OAS by insisting on promulgating abortion throughout Latin America and the Caribbean," they said in the letter.

Almagro is not required by the governing documents of the OAS to support abortion, the signatories said.

They noted that Almagro called for the OAS to take up the issue of abortion when he was still a candidate for the position of secretary general.

"Upon assuming the leadership of the OAS, Mr. Almagro made good on his promise to promote abortion as a human right," they said.

The pro-life leaders called for the United States to push for OAS leaders who will focus on human rights crises in the region, rather than putting resourcing into the effort to legalize abortion.

"As Luis Almagro is now under consideration for a second term as Secretary General, we believe is time for a change in leadership at the OAS, and respectfully request that the U.S. government withdraw its support for his reelection," they said.