For the Catholic Church to be renewed, the entire body of Christ - especially the laity - must strive to live the faith devoutly. 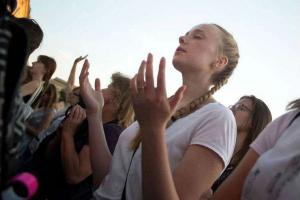 Auckland, New Zealand, (CNA) - This was the message of Father Roger Landry, who works for the Holy See's Permanent Observer Mission to the United Nations, at a Eucharistic assembly in July.

"While in history, reforms have been championed by popes, bishops, founders of religious orders and their spiritual sons and daughters, the real reform of the Church happens when lay people assimilate it and live it," he said.

"The Church is not made of marble, wood, bricks and glass, but of men, women, boys and girls, who build their lives firmly on Christ the cornerstone and Peter the rock on whom Jesus constructed the Church."

Landry spoke during the Auckland Eucharistic Convention on the weekend of July 12 at the Sacred Heart College in New Zealand. Speakers at the event also included Emeritus Bishop Denis Browne of Hamilton, founder of the conference, and Bishop Patrick Dunn of Auckland.

During his speech, Landry noted that there is much discussion about a renewed Church, particularly following recent scandals within the Church.

He pointed to the Second Vatican Council's teaching on the "universal call to holiness" and noted that the Gospels include the images of Christians as salt, light, and leaven.

"They are particularly meaningful images because they speak not only of the deep involvement and the full participation of the lay faithful in the affairs of the earth, the world and the human community, but also and above all, they tell of the radical newness and unique character of an involvement and participation which has as its purpose the spreading of the Gospel that brings salvation," he said, quoting St. John Paul II.

At the time of the New Testament, salt had three purposes: preserving food so it would not spoil, enhancing flavor, and combining with animal dung to create fuel.

Similarly, he said, Christians should preserve the world from sin, reflect God's glory, and bring others to the goodness of redemption.

"Jesus calls us to be his instrument to prevent the earth from going to corruption, from dying. We're supposed to keep the world and others good," he said. "As Salt of the Earth, we're called to be God's instrument for bringing good out of the evil we encounter, to help even those who were given over to evil to start producing something good."

"We, as salt of the earth, are called to give flavor so that others can 'taste and see the goodness of the Lord,' we're supposed to bring joy," he said.

Light is another important metaphor, Landry said, especially in a world darkened so deeply by grief, despair, sin, physical pain, and emotional wounds. Like Christ, the Christian should warm people from the cold and dispel darkness.

"He has come and mercifully taught us in such a way that we may walk as children of the light and be true children of the light. So the Christian life is supposed to be luminescent, like the lights on a landing strip at an airport on a foggy night that help planes land," he said.

"Similarly, light gives off warmth, and Christ has come into the world to warm us by his love, to burn away whatever in us is frigid or tepid, so that we in turn may warm others by the fire of divine love."

Leaven is an important metaphor, Landry said, because it teaches us that just a small number of devout Christians can have a significant impact on the world.

"We know that leaven works unseen, doesn't call attention to itself, but it does its work all the same. Much of the most important work of Christians happens through example - by our cheerfulness, by the powerful transforming influence of good friendship, by the encouraging smiles and deeds that others need when they are down," he said.

He pointed to the example of the early Japanese Christians, who kept the Catholic faith alive for centuries after the priests in the country had all been martyred.

Missionaries in the 1800s found hundreds of Catholics in a village in northeastern Japan. In place of Mass, the Catholic families would gather every Sunday to pray the Apostles' Creed, Our Father, Hail Mary, Glory Be, and an Act of Contrition.

The villagers had been instructed by previous missionaries to be steadfast and to wait for more "fathers" to come after the initial missionaries were martyred. The early priests had taught the people how to recognize the four marks of the Catholic Church: belief in the real presence of Christ in the Eucharist, devotion to Mary, the papacy ,and the priesthood.

"So great was the trust in God and in his Church by those who were being killed in the 1600s that they prepared the people for the time when Catholic priests would return to Japan, and their simple instructions were passed down by the kakure Kiristan, the clandestine Christians, for a dozen generations," Landry said.