The conviction of Cardinal George Pell has been upheld by the Court of Appeals in Victoria. After an appellate panel announced its decision at a court proceeding Aug. 21, the cardinal was returned to prison. 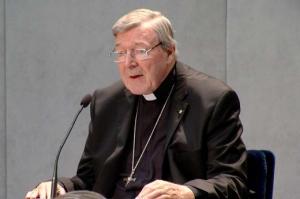 Melbourne, Australia, (CNA) - "By majority (2 to 1), the Court of Appeals has dismissed Cardinal George Pell's appeal against his conviction for the commission of sexual offences. He will continue to serve his sentence of 6 years' imprisonment. He will remain eligible to apply for parole after he has served 3 years 8 months of his sentence," Chief Justice Anne Ferguson said in her opening remarks in the Supreme Court of Victoria.

"The offences in respect of which Cardinal Pell was found guilty by a County Court jury were one charge of sexual penetration of a child under 16, and four charges of indecent act with a child under 16. The trial lasted for five weeks. The jury deliberated for several days. The jury's verdict was unanimous," Ferguson noted.

Pell stood stoic in the prisoner's dock while the decision was explained. His hands were not cuffed, but he was flanked by four security guards. He was dressed in clerical garb, rather than the prison uniform which he is now likely to wear for at least the next three years.

He faced the bench as the judges explained their decision, with his hands at his side. In a break from his usual custom, Pell did not take notes as his conviction was upheld.

In a statement released hours after the decision was announced, Pell's spokesperson, Katrina Lee, wrote that "Cardinal Pell is obviously disappointed with the decision today."

"However his legal team will thoroughly examine the judgement in order to determine a special leave application to the High Court," Lee added.

"While noting the 2-1 split decision, Cardinal Pell maintains his innocence."

"We thank his many supporters."

For her part, Judge Ferguson noted that: "Cardinal Pell's conviction and this appeal have attracted widespread attention, both in Australia and beyond. He is a senior figure in the Catholic Church and is internationally well known."

"As the trial judge, Chief Judge Kidd, commented when sentencing Cardinal Pell, there has been vigorous and sometimes emotional criticism of the cardinal and he has been publicly vilified in some sections of the community."

"There has also been strong public support for the Cardinal by others. Indeed, it is fair to say that his case has divided the community."

The cardinal was convicted Dec. 11, 2018, on five charges that he sexually abused two altar servers after Sunday Mass while he was Archbishop of Melbourne in 1996 and 1997. CNA reported last year that his initial trial, bound by a gag order, ended in a mistrial; this fact was confirmed by Ferguson in the Aug. 21 proceeding.

The cardinal, who remains an archbishop and a member of the College of Cardinals, was returned to prison immediately after court adjourned. He has been held in solitary confinement for 176 days. Pell is not permitted to celebrate Mass in prison.

He may now be transferred from the intake and evaluation facility at which he is currently being held to a different prison in Victoria.

Pell's appeal was dismissed on all three grounds the defense presented.

Judges were divided on Pell's first ground of appeal, regarding the question of whether the evidence presented against Pell was unreasonable and impossible.

At particular issue was the question of whether Pell's liturgical vestments could have been moved or lifted in the way described by the complainant, who alleged that Pell exposed himself and forced two boys to commit sex acts while he was fully vested in his Mass garb. While the defense argued that such an action would have been physically impossible, two of the appelate judges decided that was matter legitimately decided by the jury.

The judges were unanimous in dismissing two other grounds, regarding procedural matters: one that alleged Pell's arraignment did not follow protocol, and the other raising a complaint that an animation of the cathedral where Pell was alleged to have sexually abused to choir boys was not permitted to be shown during closing arguments.

Ferguson, Justice Chris Maxwell, and Justice Mark Weinberg, delivered their verdict in a packed Courtroom 15 at the Victoria Supreme Court.

Twenty-six accredited journalists and some 60 members of the public heard the judges' decision announced Wednesday morning. Pell's brother David, the cardinal's former communications director, Katrina Lee, and the chancellor of the archdiocese of Sydney, Chris Meaney were all among the crowd.

Ferguson said the judges had reached the decision after each of the them had watched video of the evidence given by 12 of the 24 witnesses who appeared in the trial.

"Each of the judges has read [the trial] transcript, some parts of it multiple times," Ferguson added, referring to the more than 2,000 pages of documents related to the trial.

The session opened with Justice Wienberg registering his dissent from the majority opinion, saying that while he agreed with the other judges in rejecting the second and third grounds of appeal, which were technical and procedural complaints, he did not agree that the jury's finding of guilt could have been beyond reasonable doubt on the evidence presented.

"Where the unreasonableness ground is relied upon, the task for the appeal court is to decide whether, on the whole of the evidence, it was open to the jury to be satisfied beyond reasonable doubt that the accused was guilty," Ferguson explained.

"Having reviewed the whole of the evidence, two of the judges... decided that it was open to the jury to be satisfied beyond reasonable doubt," Ferguson said.

"In other words, those judges decided that there was nothing about the complainant's evidence, or about the opportunity evidence, which meant that the jury must have had a doubt.'"

Ferguson said that Weinberg's dissenting opinion found that the evidence of the single accuser "contained discrepancies, displayed inadequacies, and otherwise lacked probative value so as to cause him to have a doubt as to [Pell's] guilt," and called the accuser's account of the second incident of abuse "entirely implausible and quite unconvincing."

"In Justice Weinberg's view there was a significant body of cogent and, in some cases, impressive evidence suggesting that the complainant's account was, in a realistic sense, â€~impossible' to accept."

"Nevertheless," Ferguson concluded, "the appeal on the unreasonableness ground was dismissed because the other two judges took a different view of the facts."

Since Pell was first accused of sexually abusing minors, the cardinal has maintained his innocence.

Pell has one further avenue open in petitioning the Australian High Court in Canberra. Such an effort is expected by legal experts to offer very slim chance of success, given the appeal court result.

Pell's lawyers have said that he will not petition for a shorter sentence. The cardinal, 78, is expected now to face a Vatican proceeding regarding the possibility that he has committed canonical crimes.

This story is developing and has been updated.