A federal court has issued a preliminary injunction protecting a women's overnight shelter in Anchorage from the city's demands that it house biological males. 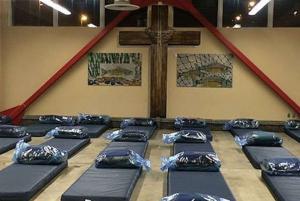 Anchorage, Alaska, (CNA) - "All Americans should be free to live out their faith and serve their neighbors"especially homeless women who have suffered sexual abuse"without being targeted or harassed by the government," said ADF Senior Counsel Kate Anderson in a statement.

Downtown Hope Center is a faith-based facility in Anchorage that offers overnight women's-only homeless shelters. These women have sometimes suffered abuse, and the center ensures that they will have a safe place to sleep, without being near men.

The center requires overnight visitors to be female at birth, at least 18 years old, sober, and demonstrative of safe behavior.

In January 2018, a biological male who identifies as a transgender female came to the center. The individual, identified as "Jessie Doe" in court documents, was turned away for being visibly intoxicated. Officials at the Downtown Hope Center encouraged him to go to the hospital to receive treatment for an open wound above his eye, and he eventually agreed.

The next day, Doe returned, but was again turned away, this time due to a failure to arrive in time for weekend admission, according to the center's policies. Officials at the homeless shelter later learned that he had been banned from a different homeless shelter for starting a fight.

A few days later, Doe filed a complaint with the Anchorage Equal Right Commission against the shelter, saying it was a public accommodation that had discriminated against him on the basis of sex and gender identity.

However, Downtown Hope Center maintains that homeless shelters are exempt from the city ordinance on public accommodations, and that Doe was turned away for violating other policies.

In her Aug. 9 ruling, U.S. District Judge Sharon L. Gleason denied the city's request that the lawsuit be dismissed. She issued a preliminary injunction preventing the city from enforcing the ordinance against the shelter while the case is being decided in court.

"Downtown Hope Center serves everyone, but women deserve a safe place to stay overnight. No woman"particularly not an abuse survivor"should be forced to sleep or disrobe next to a man," she said. "The court's order will allow the center to continue in its duty to protect the vulnerable women it serves while this lawsuit moves forward."