Cardinal Pell: 'Amazon or no Amazon, the Church cannot allow any confusion'

Cardinal George Pell has written a letter thanking supporters for their prayers and saying he is "disturbed" by the preparations for the forthcoming synod on the Amazon. 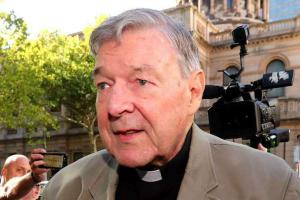 Melbourne, Australia, (CNA) - The text of the two-page, handwritten letter - images of which were shared with CNA and confirmed by sources close to Pell - has been circulated amongst a group of Pell's closest supporters in Australia.

In the letter, dated from Melbourne Assessment Prison on August 1, the cardinal also says that he has been sustained in his incarceration by his faith and by the prayers of the faithful, and that he is offering his suffering in prison for the good of the Church.

"The knowledge that my small suffering can be used for good purposes through being joined to Jesus' suffering gives me purpose and direction," Pell writes in the letter. "Challenges and problems in Church life should be confronted in a similar spirit of faith."

Pell goes on to say that "we have reason to be disturbed by the Instrumentum Laboris of the Amazonian Synod," which was published in June ahead of the October meeting.

That document, which has been the source of considerable discussion and commentary, included discussion on the subject of ordaining so-called viri probati, or "proven men" who are married, to answer a shortage of priestly vocations.

The working document, which calls for "a Church with an indigenous face," further recommends that the synod identify "an official ministry that can be conferred upon women, taking into account the central role they play in the Amazonian church."

"This is not the first low-quality document the Synod secretariat has produced," Pell writes.

The cardinal, apparently in reference to the considerable debate and criticism sparked by the synod's proposed agenda - which has also included some calls for changes the matter used to celebrate the Mass - also notes that "Cardinal G. MĂĽller, formerly of the Congregation for the Doctrine of the Faith, has written an excellent critique."

"I am no expert on the region," Pell says, though noting he has travelled to parts of the region, but cautions that "as in the Amazon, a lot of water has yet to run before the Synod."

"One point is fundamental, the Apostolic Tradition, the teaching of Jesus and the Apostles, taken from the New Testament and taught by Popes and Councils, by the Magisterium, is the only criterion doctrinally for all teaching on doctrine and practice."

"Amazon or no Amazon, in every land, the Church cannot allow any confusion, much less any contrary teaching, to damage the Apostolic Tradition," he said.

The cardinal emphasized the need for unity in the essentials of Christ's teaching, while also calling for charity in all things.

"We must always remember that the Church is one, not just in the sense that good families stick together, whatever their differences, but because the Church of Christ is based in the Catholic Church, which is the body of Christ."

Following his conviction in the County Court of Victoria on five counts of child sexual abuse in December last year, Pell was sentenced in March to six years in prison, of which he must serve at least three years and eight months.

Legal experts and commentators have discussed the weight of evidence produced against Pell during the trial, noting that the conviction rests solely on the testimony of one of Pell's alleged victims.

Attention has also been drawn to the plausibility of Pell's apparent crimes, in which he is supposed to have sexually abused two teenage boys simultaneously in the Melbourne cathedral sacristy after Mass, at a time when the space would have been both crowded with people and exposed to view.

The verdict was immediately appealed by Pell's legal team and the cardinal has remained in prison since that time.

On June 5-6, judges at the Supreme Court of Victoria heard Pell's appeal against the jury's decision. After extensive arguments from both sides, prosecutors appeared to falter under questioning by the judges.

Led by court president Justice Chris Maxwell, the lead counsel for the prosecution struggled to account for what the judge called the "wildly improbable" circumstances of Pell's alleged crimes.

The judges have been considering their decision since the June hearing. Sources close to the case told CNA that a decision is expected within the next two weeks.

In the letter, Pell says that he has received between 1500-2000 messages of support during his time in prison, and that he intends to answer all of them.

The prayers and letters of the faithful, he said, "bring immense consolation, humanly and spiritually."

"My faith in the Lord, like yours, is a source of strength."