The results of a Nicaraguan law granting amnesty to both anti-government activists and security forces will determine whether the legislation is good for the country, the Archbishop of Managua has said. 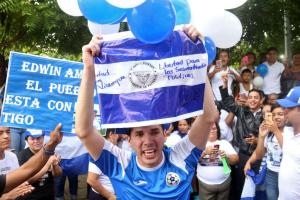 Managua, Nicaragua,  (CNA) - Nicaragua's unicameral National Assembly passed the amnesty law June 8. Though it has allowed the release of a group of political prisoners, the law has been criticized by the opposition over fears it will also give impunity to troops and paramilitaries responsible for crimes and arbitrary arrests that have taken place during the past 14 months of protests.

The law also requires those released to refrain from future protests.

Fifty-six activists were released June 11, and 50 protesters June 10. The government has detained more than 700 in connection with the protests.

Cardinal Leopoldo JosĂ© Brenes Solorzano of Managua commented June 9: "I'm just thinking of a text in Saint Matthew and Saint Luke: 'By their fruits you will know them.' I think there have been a lot of amnesties that have been given in Nicaragua, and here we would have to evaluate what fruits they have borne."

He added that it will be the implementation of the law that will end up vindicating the detractors or defenders of this legislation. However, he said that more time " would have been helpful" to deliberate calmly "such an important law like amnesty."

"That all the prisoners are getting out is a joy for the families because they're waiting for them to return. Now we're going to see how this law will be implemented and hopefully it won't be to their detriment, and that all detainees can live freely in their country," Cardinal Brenes reflected.

Anti-government protests in Nicaragua began in April 2018. They have resulted in more than 320 deaths, and the country's bishops mediated on-again, off-again peace talks until they broke down that June.

A new round of dialogue began in February, but the opposition has made the timely release of all protesters a condition of its resumption.

Nicaragua's crisis began last year after president Daniel Ortega announced social security and pension reforms. The changes were soon abandoned in the face of widespread, vocal opposition, but protests only intensified after more than 40 protestors were killed by security forces.

The Church had suggested that elections, which are not scheduled until 2021, be held this year, but Ortega has ruled this out.

Ortega was a leader in the Sandinista National Liberation Front, which had ousted the Somoza dictatorship in 1979 and fought US-backed right-wing counterrevolutionaries during the 1980s. Ortega was also leader of Nicaragua from 1979 to 1990.