50 Years of Abortion: Where does Canada go from here?

On May 14, 2019, abortion will have been legal in Canada for half a century. Since it became legal, approximately six million Canadians have died by abortion, and about 300 preborn babies are killed each day. 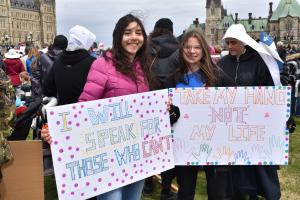 Ottawa, Canada, (CNA) - CNA spoke to influential pro-life Canadians to discuss where the country might go from here, and what can be done to promote a culture of life.

Abortion is legal in Canada throughout the entirety of a woman's pregnancy, for any reason. Canada is one of a handful of countries with no legal restrictions on abortion, at all. Abortion is regulated in Canada like any other medical procedure, but is not permitted or restricted by any other law.

"When you tell Canadians that there actually is no abortion law in Canada, their initial response is they actually don't believe that," Conservative Member of Parliament David Anderson told CNA.

Anderson believes that the pro-life community in Canada has not done a good enough job to inform Canadians about abortion, and that "when they find out what the reality of the situation is, they're much more likely to support (the pro-life) position."

Canada lacks an abortion law because the country's parliament simply refused to write one. Abortion was illegal entirely in Canada, until Prime Minister Pierre Trudeau's government passed the Criminal Law Amendment Act of 1968-1969, which allowed for abortion under limited circumstances after approval from a "Therapeutic Abortion Committee." Trudeau's son, Justin, is the country's current prime minister.

In 1988, the Canadian Supreme Court ruled in the decision R v Morgentaler that the Therapeutic Abortion Committee requirement was unconstitutional, and ordered Parliament to write a law regarding abortion.

In the 30 years since that decision, Parliament has yet to write a law.

"Because of (Parliament's inaction), we have no abortion laws in Canada restricting or granting access to abortion. By default, abortion has become available to Canadians by our medical system," said Anderson.

Anderson thinks that a better-informed Canadian population would be more accepting to pro-life viewpoints.

Informing the public about abortion may prove difficult, as multiple members of parliament told CNA that they have faced hostility from the government over their pro-life views.

"Prime Minister [Justin] Trudeau has made it really clear that his way of thinking is perceived to be the right way, and if MPs don't fit within his framework of values, then he has no use for them and no appreciation and really, him and his caucus show little to no respect of them," Conservative Member of Parliament Raechel Harder told CNA.

In 2014, Justin Trudeau made it a requirement that all candidates from his party, the Liberal Party, vocally support abortion rights. Last summer, he introduced a controversial new requirement that excluded any organization with a pro-life viewpoint from receiving government funding for a summer jobs program--even if the organization did no actual pro-life work. That measure was scrapped after considerable outcry.

Harder herself was voted down as chair of the House of Commons' Status of Women committee in 2017, entirely, she said, over objections to her pro-life views.

"Liberal committee members walked out on me when my name was put forward as chair, and then they subsequently voted me down," she said. When asked why they refused to endorse Hardy as chairwoman, "one of the members remarked that due to my value for the preborn, there's no way I could possibly represent all women in Canada."

Trudeau said that he thought her appointment as chair was "the wrong choice," something that Harder thought was "actually quite sad."

"It's actually really sad that the prime minister would have the audacity to dictate what women should or shouldn't believe in this country," she added.

Anderson also spoke to CNA about hostility created by the Trudeau government, saying that the prime minister's administration has refused to even have a debate on the issue.

"Clearly, that (attitude) permeates right through their party, when the present prime minister made it clear that anyone who held views that were contrary to his have no place in the liberal party," said Anderson.

To change this culture, Collins thinks pro-lifers need to form effective cooperative coalitions, even if religious beliefs differ among members.

"I can do certain things as Archbishop of Toronto," said Collins. "But I think others can do more effective work--you know men and women, young men, young women, lay people, people of other faiths, and I would say also, people of no faith."

At the moment, there is a push to ensure conscience rights for medical practitioners. Even this is an uphill battle, Collins explained, as "there's a lot of pressure against it" and "lots of this politically-correct stuff."

Harder and Anderson also told CNA that any sort of change must stem from the Canadian people, not members of parliament passing legislation.

"I think the push for change is going to have to come from a large group of the Canadian population," he said. "Some governments are reluctant to move on this issue, probably because it's a very contentious issue, and typically governments are not going to engage in issues where they're not going to get some sort of clear agreement on the way forward."

Harder concurred, and thinks that change must come from Canadian citizens, through extensive communication and dialogue.

She continued, saying "I believe that through that engagement, that greater education can take place and a deeper understanding can be produced, with regard to the value of the preborn. And as those conversations take place, and a greater understanding is created, I believe that culture can be shifted. But this is a matter of the human heart and conscience more than anything."