Father Claude Grou is out of the hospital and grateful for the groundswell of support he received after he was stabbed by an assailant while celebrating a televised Mass at St. Joseph's Oratory in Montreal Friday morning. 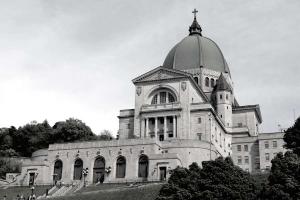 Montreal, Canada, (CNA) - The 77-year-old priest said in a statement that the words of support he had received "warm my heart and allow me to contemplate these difficult moments peacefully." He said he was in good health and still processing the Friday attack, CBC News reports.

Celine Barbeau, a spokesperson for the oratory, said the priest will grudgingly take a few days' break.

Though he needs a few days, he is in "a very good state of mind," said Barbeau.

"And actually he's eager to go back to work. We have to hold him back," said the spokesperson.

Grou was standing behind the altar for daily Mass with about 60 congregants in the oratory's Crypt Church when he was rushed by a man in a baseball cap, who stabbed him.

Authorities detained a 26-year-old suspect they said is known to police.

The priest, who is rector of the shrine, was taken away by ambulance. Montreal police said he suffered upper-body "lacerations."

Adele Plamondon was finishing the day's reading when the assailant stood up from the pew.

"I saw this man coming quickly and taking his knife out and going straight for PĂ¨re Grou," she said, according to CBC News. "It was obvious what his intentions were. So, I left screaming to alert the security."

"Father Claude Grou, Canadians are thinking of you and wishing you a swift recovery," Prime Minister Justin Trudeau said on Twitter the day of the attack.

"We are all shocked by this act of violence that has taken place in our city, in a space dedicated to peace," Archbishop Christian Lepine of Montreal said in a statement.

"We know that places of worship of many religions are targets of acts of violence," the archbishop continued. "We must continue to follow the path of peace and love, believing that good will overcome evil through prayer and good works."
Construction on the mountaintop oratory was finished in 1967. Its dome is visible from across Montreal. It is the largest shrine dedicated to St. Joseph in the world, with about two million annual visitors.

St. Andre Bessette, a Holy Cross brother devoted to the poor and sick, had built a chapel to St. Joseph on the site with help from friends and money he received from giving haircuts to students. He spread devotion to St. Joseph and the brother's prayers were believed to be especially effective in working miraculous cures, drawing many visitors.

Larger versions of the chapel were built as more and more visitors came. When he died in 1937, over one million people attended his wake and funeral.

Brother Andre was canonized under Pope Benedict XVI in 2010.