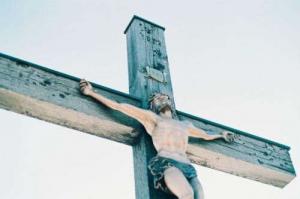 Montreal, Canada, (CNA) - A crucifix that has hung on the wall of Montreal's City Hall since 1937, reminding city officials to let God guide their decisions, will be taken down for a renovation project, never to be put back, local sources have reported.

City councilor Laurence Lavigne-Lalonde made the announcement at an executive council meeting this week.

"The crucifix was installed during an era that was completely different than the one we live in today," Lavigne-Lalonde told the council, according to CTV News Montreal.

"We now live in a society that has evolved and is represented by democratic institutions that must be secular, neutral and open to all citizens," Lavigne-Lalonde added.

"I truly believe and based on all the discussion that has been done in the past, that it doesn't have to be in city council where it is a secular institution. This is a place where we make decisions and it was originally put there to support decision making," she said at the meeting. "I think we're in a very different time now."

Plante added that the decision is a "recognition of the role of secularism in the institution, and for me, there is a stark distinction between individual and institutional secularism," she said, according to the CBC.

City officials also said they will be removing another crucifix that is hung in a different room in city hall.

After the decision was announced, the Archdiocese of Montreal issued a statement saying that the crucifix is a symbol of the Christian roots of Canada and doesn't need to be removed in a religiously pluralistic society.

"As a sign revered by Christians, the crucifix remains a living symbol. It symbolizes openness and respect toward all peoples, including toward other faith communities and religious traditions, which rightfully adhere to their own signs and symbols," Archbishop Christian LĂ©pine said in his statement. "Nevertheless, nothing forbids us, and our respective beliefs, from being present in the public space in an attitude of respect and openness, since we share the same common humanity," he added.
"When it comes to transmitting spiritual and communal values in a spirit of togetherness and solidarity, the crucifix is laden with meaning, expressing and encapsulating what fortifies the population of Montreal since its foundation, a legacy of which we can be proud."

Issues of religious freedom and the display of religious symbols have been prominent issues in Canada recently, and Montreal's decision brought up an ongoing debate about the crucifix that hangs in the legislature building of Quebec. According to the CBC, Premier FranĂ§ois Legault of Quebec has previously defended the crucifix's place in the province's National Assembly, even while he backed a bill that would have banned the wearing of religious symbols by civil authorities, such as cross necklaces or hijabs. The bill was recently tabled by the legislature.

But after the Montreal decision, he balked: "There are good arguments for and some arguments against, and right now we have a debate. We have to find a compromise," Legault told CBC. "I accept the decision of the City of Montreal."

Immigration Minister Simon Jolin-Barrette of Quebec, who backed the religious symbols bill, told CTV News that the National Assembly does not have to follow the decision of Montreal to remove their crucifix.

"They can do what they want about that. The National Assembly has always decided to maintain (the crucifix) and that's the position of the government because it's a (historical) symbol," he said.